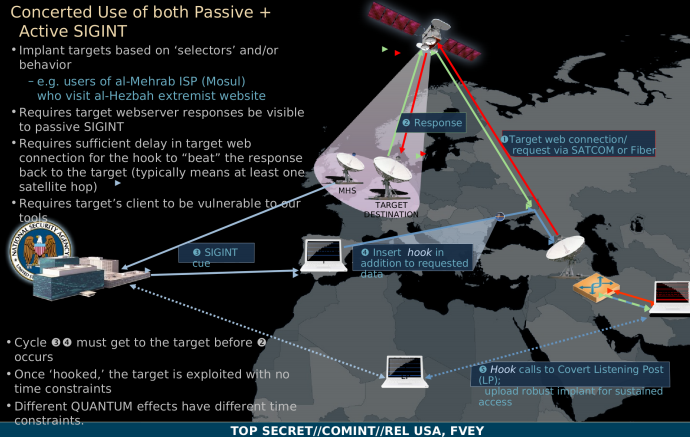 Mass surveillance by the NSA was apparently just the beginning. The agency is now preparing for future wars in cyberspace, in which control over the internet and rival networks will be the key to victory, documents leaked by Edward Snowden reveal.

The National Security Agency’s aim is to be able to use the web to paralyze the enemy’s computer networks and all infrastructures they control – including power and water supplies, factories, airports, and banking systems, Der Spiegel magazine wrote after viewing the secret files.

The publication stresses that international conventions regulating the new digital weapons of the 21st century are almost non-existent, and the only law that applies in the field is “the survival of the fittest.”

Mass surveillance by the NSA was only “Phase 0″ in America’s digital war strategy, according to the leaked documents. It was intended to detect vulnerabilities in enemy systems so that “stealthy implants” could infiltrate the systems, allowing “permanent accesses.”

Phase Three, which is labeled “Dominate,” enables the agency to “control/destroy critical systems & networks at will through pre-positioned accesses (laid in Phase 0).” According to the internal documents, the NSA’s ultimate goal is “real time controlled escalation,” Der Spiegel wrote.

Meanwhile, a presentation by the spy agency, seen by German journalists, forecasts that “the next major conflict will start in cyberspace.”

In response, US authorities have been heavily investing into preparations for the upcoming network warfare.

In the 2013 US secret intelligence budget, the NSA projected it would require around $1 billion to strengthen its computer network attack operations.

In recent years, cybersecurity experts have attributed plenty of discovered malware to the NSA and its Five Eyes alliance (US, UK, Canada, Australia, and New Zealand). Such malware was used in multiple attacks – most notably to infiltrate the Iranian nuclear program (Stuxnet) and listen to German Chancellor Angela Merkel’s phone calls.

The documents reveal Quantumdirk, a new NSA program which injects malicious content into chat services provided by sites such as Facebook and Yahoo.

Another type of malware, Straitbizarre, can turn infected computers into disposable and non-attributable “shooter” nodes – controlled by NSA’s Quantum network – which are used for “command and control for very large scale active exploitation and attack.”

According to the files, the digital war will make little differentiation between soldiers and civilians, and any internet user is now at risk of suffering damage to their data – or even their whole computer.

Edward Snowden, 31, is wanted in the US on charges of espionage related to the theft of a large number of NSA documents. Since June 2013, the whistleblower – who has been granted asylum in Russia – has uncovered invasive NSA mass surveillance practices in the US and around the globe, as well as a startling amount of other intelligence secrets.