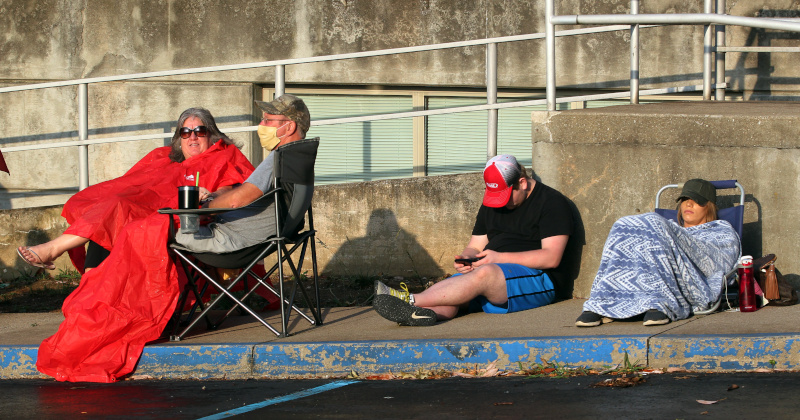 It was the 20th straight week that more than a million people sought government assistance as the virus unrelentingly attacks communities large and small throughout the country, forcing employers to shut down their businesses or curtail their operations and lay off workers.

But last week’s claims total was an improvement, 249,000 fewer workers seeking aid than the previous week, perhaps because a four-month boost in federal aid to the unemployed has, at least for the moment, ended.

Until last Friday, the U.S. was sending an extra $600 a week to the jobless workers on top of less generous state unemployment benefits. However, the federal payments expired at the end of July and so far this week the administration of President Donald Trump and opposition Democrats in Congress have been unable to reach an agreement on how long to extend the payments or how much the assistance should be.

Republican lawmakers said they are looking to immediately cut the federal boost by two-thirds, to $200 a week, while saying they hope eventually to set the benefit claims at 70% of workers’ former wages. Democratic lawmakers want to keep the current $600-a-week extra payments through the end of 2020.

Treasury Secretary Steven Mnuchin and White House chief of staff Mark Meadows representing Trump have been negotiating with House Speaker Nancy Pelosi and Senate Democratic leader Chuck Schumer over the jobless benefits and other aid to boost the flagging U.S. economy that has been staggered by the coronavirus pandemic.

They have set a goal of reaching a deal by Friday but appear to be far apart on several issues. Trump said this week he will unilaterally impose terms of some continuing aid through an executive order if the negotiators cannot reach a deal.

A week ago, the Commerce Department said the American economy, the world’s largest, plummeted 9.5% between April and June, the biggest quarterly plunge in records dating back seven decades.

The three-month drop, combined with a 4.8% dip from January through March, officially dipped the U.S. economy into a recession as it struggles to regain its footing. The unchecked pandemic, with a surging number of new cases, has left more than 158,000 Americans dead and infected more than 4.8 million.

It is estimated that more than 30 million U.S. workers remain unemployed, although not all are collecting assistance. Since March, 55 million people have collected unemployment insurance at one time or another.

Federal Reserve Chair Jerome Powell a week ago said the new surge in confirmed coronavirus infections poses new threats to the economy. Millions of workers have returned to their jobs but thousands of employers have also continued to lay off workers or pause reopening their doors as the virus spreads, particularly in such large states as Florida, Texas and California.

“On balance, it looks like the data are pointing to a slowing in the pace of the recovery,” Powell said. “I want to stress it’s too early to say both how large that is and how sustained it will be.”

Powell said some measures of consumer spending, such as debit card and credit card use, have fallen since late June when coronavirus infections jumped after easing in previous weeks.

He said labor market indicators signal slower job growth and that hotel occupancy rates have flattened. Powell said Americans are not going to restaurants, gas stations and beauty salons as much as they had been earlier this summer.

He said a full economic recovery depends on the country’s ability to control the virus, something it has been unable to do so far.

“A full recovery is unlikely until people are confident that it’s safe to engage in a broad range of economic activities,” Powell said.

Lawmakers have voiced support or opposition to a wide range of coronavirus economic aid proposals. Some want to send another round of $1,200 stimulus payments to most adults in the country, even as some Republican lawmakers have expressed concerns about the country’s ever-increasing national debt that now totals more than $26 trillion. Some lawmakers have called for incentive payments to returning workers, some of whom have collected more in unemployment benefits than from their earnings while working.

Trump, facing a difficult re-election contest in November against former Vice President Joe Biden, says he is open to continuing the jobless benefits at some unspecified level but wants to make sure they are not so high that they provide an incentive for workers to continue collecting the benefits rather than return to work if they have a chance to.

Trump said recently the coronavirus pandemic in the U.S. “will probably, unfortunately, get worse before it gets better” but this week has said it will just disappear. He is predicting the economy will regain strength later this year and into 2021.

The southern tier of U.S. states that had escaped the brunt of the pandemic in March and April has been particularly hard hit. Their governors reopened businesses — too soon, some now acknowledge — and younger people started socializing in public again at bars and restaurants without embracing such preventive practices as wearing a face mask or social distancing themselves from others by at least two meters.

Now, some state governors are ordering these businesses shut down again. Investment bank Goldman Sachs said 70% of the country has either reversed reopening plans or delayed them.

Key U.S. economic officials are predicting the country’s full recovery from the pandemic will take a lengthy period, extending well into 2021.