There is a growing groundswell within American Republican and Tea Party ranks that impeachment proceedings should be initiated against President Obama on a whole list of violations of the Constitution and the War Powers Act. ~ Peter Paton 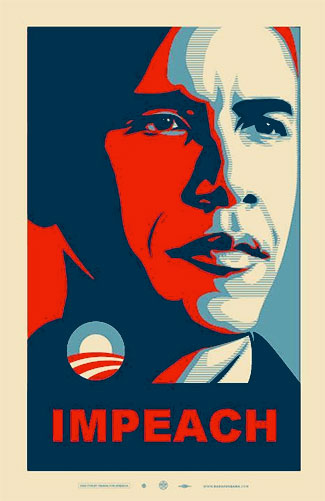 Congressmen Allen West of Florida (R-Florida) and Darrell Issa (R- California) have consistently and loudly criticized the president for overstepping the political mark and bypassing Congress’s approval on a whole range of dubious policies and issues: and the recent Obama attack on the Supreme Court of Justice and the Russian ” Open Mic ” gaffe on National Security, leads to one question…

Is Barack Obama making his own case for impeachment? Obama did not become the Democratic nominee for President without the help of several leaders of the Democratic Party who knew that he was not eligible for office

Listed below are the One Hundred Articles of Impeachment.

1. Appointment of a “shadow government” of some 35+ individuals termed “czars” who are not confirmed by the Senate and respond only to the president, yet have overarching regulatory powers – a clear violation of the separation of powers concept. Obama bypassed the Senate with many of his appointments of over 35 “czars.”

2. No congressional support for Libyan action (violation of the War Powers Act ). Obama lied to the American people when he said that there were no US troops on the ground in Libya and then later said they were only “logistical troops.” Obama violated the War Powers Act of 1973 by conducting a war against Libya without Congressional authorization.

3. Betraying of allies ( Israel and Great Britain. Obama has placed the security of our most trusted ally in the Middle East, Israel, in danger while increasing funding to the Palestinian Authority (Fatah, just another Islamic terrorist group) whilst they have enjoined a reconciliation pact with long-standing terrorist group Hamas and the disclosure of British nuclear secrets to the Russians in the Start Treaty.  Obama gave missile codes to British Trident missiles to Russia.

4. Backdoor implementation of the DREAM Act which would grant 22 million illegals amnesty. Obama passed the Dream Act through an executive order, bypassing Congress again. DREAM is: Development, Relief and Education for Alien Minors

5. Telegraphing troop reductions to enemies – against the consult of his experienced field commanders – while embracing negotiations with our enemy, the Taliban, and recognizing another, the Muslim Brotherhood.
(Article continues on next page.)