You might as well stick a fork in the U.S. healthcare system because it is finished.  Even before Obamacare, Americans paid far more for healthcare than anyone else in the world. 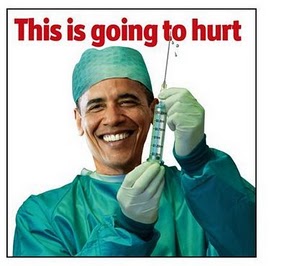 Now thanks to Obamacare we will be faced with much higher health insurance premiums, much higher taxes, much longer waits to see doctors and more government bureaucrats involved in our lives than ever before.  As I have written about previously, the U.S. healthcare industry is a horrible mess, and now Obamacare is going to take the entire system directly into the toilet.  All over America today, families are going broke because of outrageous health insurance costs and suffocating medical debt, doctors are going broke and leaving the profession because they can’t make a living, and sick people are dying because they cannot get the care that they need.  So what solution does Obama give us?  A nearly 3,000 page monstrosity that will destroy what is left of our crumbling healthcare system and that will unleash 16,000 new IRS agents to hunt down the millions of Americans that do not currently have health insurance.  For those that love Big Brother socialist totalitarianism, Obamacare is a dream come true.  For the rest of us it is a total nightmare.

Obamacare is truly a Trojan horse.  The millions of Americans that support Obamacare believe that they have been “given” something.  But that is a lie.

All of us aren’t going to be getting free government healthcare as a result of this law.

Instead, we are all being forced to buy health insurance policies that many Americans do not even want from deeply corrupt health insurance companies that make more money when they provide less healthcare.  If we don’t buy government-mandated health insurance the IRS will be coming after us.  This reality was beautifully communicated by this cartoon that was posted on Facebook recently.

As a result of Obamacare, there will be more government intrusion in our lives than ever before. Hordes of government bureaucrats will now run the system, with predictable results.

If you think that the amount of paperwork in our healthcare system is bad now, just wait until this new law is fully implemented.

Is Obamacare complicated?  For an answer to that question, just check out this flow chart.  What sick minds came up with such a monstrosity?

So who is going to pay for this monstrous system?

You and I are.

Americans for Tax Reform has compiled a list of 21 of the new taxes that Americans will be paying as a result of Obamacare.  And because Democrats have decided that they will fight to the death to save this law, the Republicans will have to take the White House, the U.S. Senate and the U.S. House of Representatives to have any chance of fully repealing it.

As I wrote about the other day, there are a whole host of reasons why Obamacare is bad for America.  But instead of going on and on about what I think, I thought that I would share some of the very interesting things that other people have been saying about the Supreme Court Obamacare decision.

The following are 12 incredible Obamacare quotes that show that our wretched healthcare system is headed directly into the toilet….

We’re going to be “gifted” with a health care plan we are forced to purchase and fined if we don’t! Which purportedly covers at least ten million more people without adding a single new doctor, but provides for 16,000 new IRS agents, written by a committee whose chairman says he doesn’t understand it, passed by a Congress that didn’t read it but exempted themselves from it, and signed by a Dumbo President who smokes, with funding administered by a treasury chief who didn’t pay his taxes, for which we’ll be taxed for four years before any benefits take effect, by a government which has already bankrupted Social Security and Medicare, all to be overseen by a surgeon general who is obese , and financed by a country that’s broke!!!!!

‘What the hell could possibly go wrong?’

“Again, whatever you want to call it Alisyn, fines, taxes, penalties, but three quarters of those costs will fall on the backs of families who make less than $120,00 a year, so it’s a big punch in the stomach to middle class families.”

“Because of the mandate, Americans will be forced to pay for a system that will increase costs for patients, remove health care decisions from both the doctor and the patient and lead to rationing. It changes health care as we know it into a system based on one-size-fits-all, cost-controlled and conveyor belt socialized medicine”

“The United States of America took a giant step toward a totalitarian socialist government when the Supreme Court voted to uphold Obamacare, allowing the individual mandate for the government to force American citizens to buy health insurance whether they want to or not.”

“This is patently obvious: the power to ‘regulate’ commerce cannot include the power to compel commerce! Those who claim otherwise simply ignore the plain meaning of the Constitution because they don’t want to limit federal power in any way. The commerce clause was intended simply to give Congress the power to regulate foreign trade, and also to prevent states from imposing tariffs on interstate goods. In Federalist Paper No. 22, Alexander Hamilton makes it clear the simple intent behind the clause was to prevent states from placing tolls or tariffs on goods as they passed through each state — a practice that had proven particularly destructive across the many principalities of the German empire.”

“Today America is threatened with a stage three cancer of socialism, and Obamacare is exhibit 1.  There are many of us here who have been fighting this for three years and we don’t really want the compassion of the IRS and the efficiency of the post office introduced in our healthcare and we are not going to rest until every single line of this bill is repealed.”

“But even if Obama is replaced in the White House, the damage has already been done. With its decision, the U.S. Supreme Court has set a precedent of government control over private paychecks, and that precedent has fundamentally crushed economic freedom in America and opened the door to limitless taxes for everything imaginable. King George III couldn’t have done it better.”

#9 The communications director of the Tenth Amendment Center Mike Maharrey

“The states simply need to follow Thomas Jefferson’s prescription and nullify the entire act. They should just refuse to implement this monstrosity. Wisconsin Governor Scott Walker has already indicated he will refuse, and other states should follow his lead.”

I’ve never bought medical insurance. The only time a policy has covered me was when it came incidental to a job. The Lord has blessed me with disgustingly good health; then, too, when I was 18, my mother died of a brain tumor that had escaped diagnosis for six years despite excruciating headaches and other symptoms a professor of nursing later described as “classic.” If I were bleeding and unconscious, I might wind up in the clutches of the medical establishment, but never of my own volition.

So I deeply and personally resent Roberts’s little parlor-trick of a word-game. Forcing me to buy medical insurance is unconstitutional if we call it a “fine” but perfectly OK if it’s a “tax.”

#11 Byron Maduska in the Leavenworth Times….

“A new survey of Doctors has been released. The results are bleak.

If Obamacare is fully implemented, 83 percent will consider leaving the practice of medicine. Sixty-one percent say it’s an affront to their ethics. Eighty-five percent say it destroys the doctor-patient relationship. Sixty-five percent say governmental involvement is the cause of the problems in medical care now. Seventy-two percent say the insurance mandate won’t result in improved access to medical care. Seventy-four percent say they’ll stop accepting Medicare patients, or leave Medicare altogether. Seventy percent say reducing governmental involvement would be the single best fix for healthcare in this country. The negatives of Obamacare went on and on in the results of the survey.”

“This decision goes against the very principle that America has a federal government of limited powers; a principle that the Founding Fathers clearly wrote into the Constitution, the supreme law of the land.  The Constitution was meant to restrict the power of government precisely for the purpose of protecting your liberty and mine from the overreaching hand of the federal government.  This unprecedented decision says that Congress has the authority to force citizens to buy private goods or face fines – a power it has never had in American history, and a power King George III and Parliament didn’t have over us when we were mere subjects of Great Britain.  Since the federal government itself could never articulate to the court a constitutional limit to this power, Congress has gained an unlimited power to force citizens to buy anything.”

So what do you think Obamacare is going to do to the healthcare system in America?

Please feel free to post a response with your feelings below….