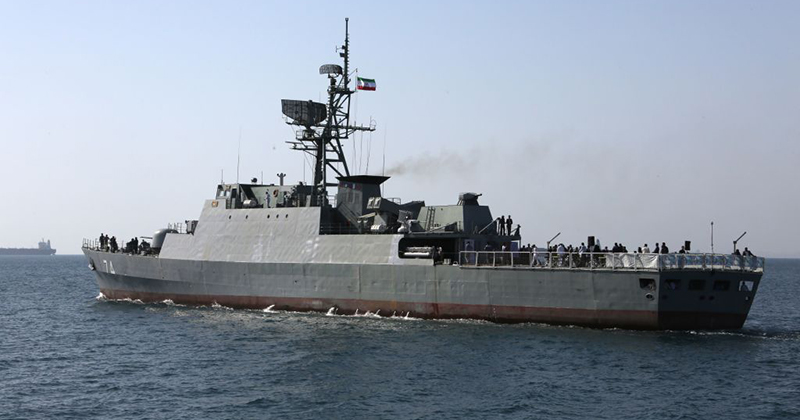 Since President Trump pulled the US out of the JCPOA (better known as “the Iran nuclear deal”), Iran has suffered one embarrassing mishap after the next.

The fact that the regime ineptly lied about the shoot-down, before finally coming clean in the face of overwhelming evidence, only compounded the embarrassment.

At around the same time the coronavirus was just beginning its spread across Western Europe, Ieaked reports out of Iran revealed that the mysterious new virus was already spreading like wildfire, dropping hundreds of bodies as public health officials scrambled to jerry-rig a credible response plan, while American sanctions limited the country’s ability to import critical supplies like medicine (a problem that Iran’s sympathizers in the EU helped it solve).

And now, in the early hours of Monday morning, Iran’s military has stumbled into another epic f*ckup: The NYT reports that 19 Iranian sailors have died, 15 were injured and nearly 2 dozen more are missing after a missile test at sea went horribly awry. An Iranian ship sustained “friendly fire” as a target-seeking missile slammed into its stern instead of striking the dummy “target” the ship had just towed out to sea.

Official details of the incident were scant, and the navy said that 15 other people were injured. But four people with knowledge of the incident said that the ship, identified as the missile boat Konarak, was hit and sunk by a missile from the frigate Jamaran by mistake. They spoke on the condition of anonymity to avoid reprisal from Iranian officials.

“The scope of the incident is under investigation by experts,” Iran’s Navy said in a statement.

According to the Intelligence Firm Jane’s Information Group cited by the Washington Post, the ship was struck not far from the Iranian port city of Jask, near the Strait of Hormuz by a Noor an anti-ship cruise missile that has long been a part of Iran’s anti-ship arsenal.

Notably, this latest “mishap” – which happened during a missile test in the Gulf of Oman – occurred shortly after President Trump ordered US Navy ships in the area to fire on Iranian ships if they felt threatened. Critics of the repressive, hard-line Islamic theocracy leapt at the chance to highlight the government’s ineptitude.

The reports of the latest mishap drew criticism of the government on social media.

“Firing at your own targets, whether military or civil, in such a short space of time is not human error. It’s a catastrophic failure of management and command,” tweeted Maziar Khosravi, a journalist aligned with reformist politicians.

The friendly-fire case occurred on Sunday afternoon in the Sea of Oman, near the Iranian port city of Jask. Iran routinely conducts military exercises in the Persian Gulf and Sea of Oman with a dual purpose: testing new domestically produced equipment and showcasing its military might as tensions between Washington and Tehran escalate and the threat of military conflict looms.

It was not immediately clear whether human error or faulty equipment was involved in Sunday’s accident.

Senior military officials in Iran were at a loss for words, with one tweeting that the accident was “very sad for all of us” (but especially for the families of the dead, right?)

“This accident is very sad for all of us,” tweeted Seyed Mohamad Razavi, a prominent media adviser to conservative politicians, including Mohamad Baqer Ghalibaf, the incoming speaker of Parliament and a former Revolutionary Guards commander.

The gunboat that fired the missile, known as the Jamaran, is one of Iran’s most prized military ships.

The Dutch-made vessel was in service since 1988 and usually carries a crew of 20 sailors, the AP said. The loss of the Konarak, the ship that was struck, will “not have a significant impact on the capabilities of the Iran Navy,” one analyst told WaPo.

The Konarak had not sufficiently distanced itself from the target when the missile was fired. Instead of hitting the target, the missile slammed into the tail of the Konarak, according to the Telegram channel, called SepahCybery, and Mr. Razavi.

The Jamaran is considered one of the prides of Iran’s fleet, and a triumph of homegrown naval technology. Iran’s supreme leader, Ayatollah Ali Khamenei, inaugurated the Jamaran in 2010 in unusual appearance onboard the ship.

Military analysts around the world hurriedly warned that this latest incident is just the latest example of how the next Middle Eastern war could be just one “human error” away.

Military experts said that Sunday’s episode was a significant setback for Iran’s navy and its ambitions to project itself as a power player in the Persian Gulf and beyond. Together with the downing of the Ukrainian airliner, it undermines an effort by Iran to present its military as a force capable of countering the United States and its regional allies, they said.

“This really showed that the situation with Iran is still dangerous, because accidents and miscalculations can happen,” said Fabian Hinz, an expert on Iran’s military at the Middlebury Institute of International Studies at Monterey. “It doesn’t give you confidence about the stability of the Persian Gulf.”

It’s also worth noting – since the American MSM almost certainly won’t – that this mishap is just the latest embarrassment that undermines the credibility of the Iranian regime abroad and, more importantly, at home. Since Trump has adopted his hard-line approach, the Iranian hardliners have been on their heels. For the first time in decades, the notion that the regime might collapse, or at the very least be forced to undertake some important domestic reforms (and capitulating on its military missile and nuclear programs). As history has repeatedly shown, appeasement of the enemy seldom succeeds in eliciting change. Only pressure can do that.