Are we too stupid to continue as a nation?  That may seem like a harsh question, but I think that it is one that we need to ask.  Even though we have more access to information today than ever before, it seems like the U.S. population just keeps becoming more ignorant.  So at what point does a society become so “dumbed-down” that it can no longer function effectively?  We like to complain about our leaders, but the truth is that we are the ones that elected them.  They are a reflection of who we are as a society.

And when you compare Barack Obama, Harry Reid, Nancy Pelosi and John Boehner to men like George Washington, John Adams, Thomas Jefferson and Andrew Jackson, they don’t fare too well.  Sadly, the truth is that most of our founding fathers would not have a prayer of being elected today.  Instead, they would be labeled as crazy “extremists” for insisting that we follow the U.S. Constitution.  In our entertainment-addicted society, Lady Gaga would have a much greater chance of being elected president today than George Washington would.  That is how far we have fallen.

Perhaps you think that I am being overly pessimistic.

Perhaps you think that I should have more faith in the American people.

Well, just consider the evidence.  The following are 19 surveys which prove that a large chunk of the population is made up of totally clueless sheeple…

#1 One survey found that 56 percent of Americans believe that it is okay for the government to track “the telephone records of millions of Americans” in order to keep us safe.  Apparently those people have never heard of the Fourth Amendment.

#3 67 percent of Americans support the use of unmanned drones in “homeland security missions” inside the United States.  What’s next?  Will there be “security robots” that stand in the corner and watch us as we eat dinner with our families?

#4 Close to one-third of all Americans would be willing to submit to a “TSA body cavity search” in order to fly.

#5 20 percent of all government workers and 26 percent of all Obama supporters consider the Tea Party to be “the biggest terror threat” that America is facing.

#6 89.7 percent of Americans believe that they are eating a healthy diet.  Meanwhile, approximately 36 percent of all Americans are obese.

#8 One survey found that 42 percent of all Americans are unaware that Obamacare is law.

#9 The average American watches 28 hours of television every week.

#10 According to a survey conducted by the National Geographic Society, only37 percent of all Americans between the ages of 18 and 24 can find the nation of Iraq on a map.

#11 Close to 25 percent of all Americans do not know that the United States declared independence from Great Britain.

#13 According to one survey, 24 percent of all U.S. teens that have a sexually-transmitted disease say that they still have unprotected sex.

#14 Approximately one out of every five teenage girls in the United States actually wants to be a teenage mother.

#15 As I noted the other day, 48 percent of all Americans do not have any emergency supplies stored up at all.

#16 One survey found that 51 percent of all Americans agree with this statement: “it is necessary to give up some civil liberties in order to make the country safe from terrorism.”

#17 According to a Bloomberg survey, only 16 percent of Americans believe that the Federal Reserve should be abolished.

#18 29 percent of all Americans cannot recall the name of the vice-president of the country.

As a nation, we no longer seem to care much about what the U.S. Constitution actually says.  When our politicians tell us that they want to ignore large sections of the Constitution, we just shrug and go along with it.

And we have completely abandoned the values and the principles that this country was founded on.  Our society bears very little resemblance to 18th century America, and we like it that way.  We like to think that we have “progressed” far beyond where they were at, but the truth is that our country is coming apart at the seams all around us.

In this day and age, it is imperative that Americans learn to think for themselves.  Way too many Americans are just like sheep – they just blindly follow the herd.

It is time to break out of “the matrix” and to start seeing things for how they really are.  Our nation is crumbling and our leaders are taking us down a path toward oblivion.  We need to wake up our fellow Americans while there is still time. 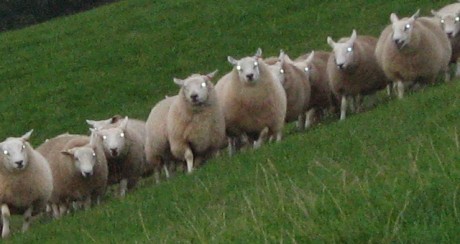