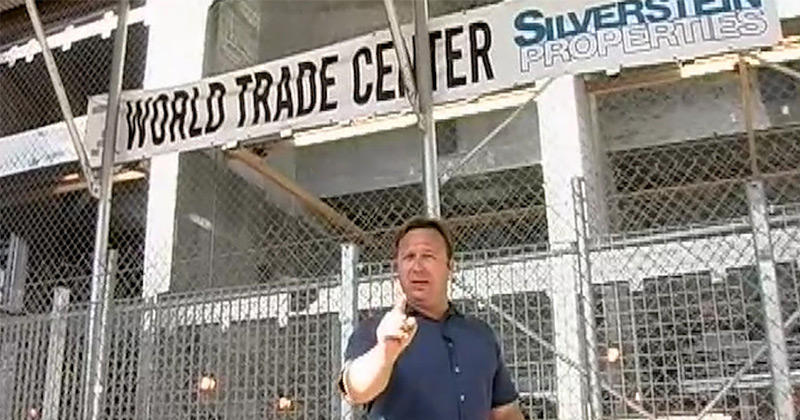 Two months before the 9/11 terror attack, Alex Jones warned listeners to call the White House and let them know Americans are aware of an impending false flag terror event used to usher in a global government.

Jones specifically referred to the CIA boogeyman Osama Bin Laden, saying he “was a known CIA asset in the 80’s, running the mujahideen war, and whose family builds all the military bases in Saudi Arabia and sits at the board of Iridium satellite.”

In the years following, Jones was involved in directing, writing, producing and starring in multiple documentaries exposing the criminal elements within the United States government who assisted in the 9/11 attacks.

The first film, “9/11: The Road to Tyranny,” was released in 2002 and can be watched in its entirety below or shared by going to Banned.video.

The documentary provides historical examples of false flag attacks and how the globalist elite have adopted these tactics in order to carry out their agenda.

Watch the full documentary below:

Another 9/11 film uploaded to Banned.video is the 2006 documentary sequel, “Loose Change 2.”

The film was written and directed by Dylan Avery and produced by Korey Rowe, Jason Bermas, and Matthew Brown.

A 2008 documentary by Alex Jones titled, “9/11 Chronicles: Truth Rising,” dove deeper into the people and organizations involved in the false flag attack.

In the following video, WTC Emergency Coordinator Barry Jennings, who was the last man out of building 7, shares his experience on that tragic day.

Next, janitor and 9/11 hero William Rodriguez, who was in charge of the stairwells and was the last man left in the North Tower, describes explosions taking place inside the building before the first airplane ever hit.