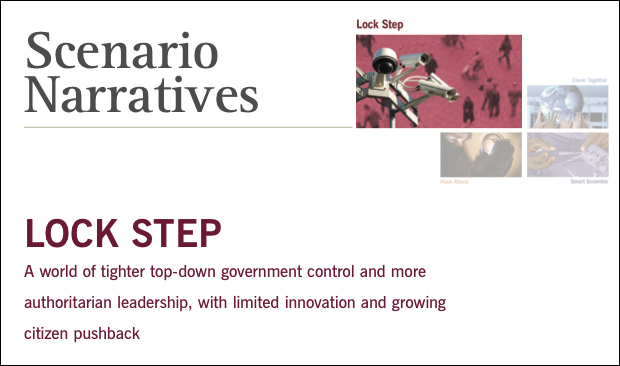 A May 2010 scenario planning report produced by The Rockefeller Foundation and the Global Business Network envisions the likely creation of a technological police state in response to a deadly worldwide pandemic.

The document, entitled Scenarios for the Future of Technology and International Development, attempts to wargame different government responses to several potential disasters, while painting the solution as global governance. Page 18 of the document breaks down a fabricated scenario in which the United States refuses to protect its borders and restrict air travel following the outbreak of a new deadly virus.

“In 2012, the pandemic that the world had been anticipating for years finally hit. Unlike 2009’s H1N1, this new influenza strain—originating from wild geese—was extremely virulent and deadly,” the scenario states. “Even the most pandemic-prepared nations were quickly overwhelmed when the virus streaked around the world, infecting nearly 20 percent of the global population and killing 8 million in just seven months, the majority of them healthy young adults.”

Drawing eerily similar circumstances with the current Ebola outbreak, the scenario goes on to detail a botched response by the United States government as large populations throughout Africa are decimated.

“The pandemic blanketed the planet—though disproportionate numbers died in Africa, Southeast Asia, and Central America, where the virus spread like wildfire in the absence of official containment protocols. But even in developed countries, containment was a challenge,” the document reads. “The United States’s initial policy of ‘strongly discouraging’ citizens from flying proved deadly in its leniency, accelerating the spread of the virus not just within the U.S. but across borders.”

However, a few countries did fare better—China in particular. The Chinese government’s quick imposition and enforcement of mandatory quarantine for all citizens, as well as its instant and near-hermetic sealing off of all borders, saved millions of lives, stopping the spread of the virus far earlier than in other countries and enabling a swifter post- pandemic recovery.

China’s government was not the only one that took extreme measures to protect its citizens from risk and exposure. During the pandemic, national leaders around the world flexed their authority and imposed airtight rules and restrictions, from the mandatory wearing of face masks to body-temperature checks at the entries to communal spaces like train stations and supermarkets.

Necessary and questionable tactics used to stem the tide of the virus remain long after the pandemic, allowing governments to impose “authoritarian” controls under the guise of protecting the public.

“Even after the pandemic faded, this more authoritarian control and oversight of citizens and their activities stuck and even intensified. In order to protect themselves from the spread of increasingly global problems—from pandemics and transnational terrorism to environmental crises and rising poverty—leaders around the world took a firmer grip on power.”

“At first, the notion of a more controlled world gained wide acceptance and approval. Citizens willingly gave up some of their sovereignty—and their privacy—to more paternalistic states in exchange for greater safety and stability. Citizens were more tolerant, and even eager, for top-down direction and oversight, and national leaders had more latitude to impose order in the ways they saw fit.”

The pandemic was also used to implement long-sought technologies, most notably biometric IDs for citizens.

In developed countries, this heightened oversight took many forms: biometric IDs for all citizens, for example, and tighter regulation of key industries whose stability was deemed vital to national interests. In many developed countries, enforced cooperation with a suite of new regulations and agreements slowly but steadily restored both order and, importantly, economic growth.

Across the developing world, however, the story was different—and much more variable. Top-down authority took different forms in different countries, hinging largely on the capacity, caliber, and intentions of their leaders. In countries with strong and thoughtful leaders, citizens’ overall economic status and quality of life increased. In India, for example, air quality drastically improved after 2016, when the government outlawed high- emitting vehicles.

While fictional, the attempt to predict and plan for major disasters by think tanks and governments alike could very well provide insight into decisions being made currently. Although certain medical protocols are needed, the likelihood for subtle power grabs are dangerous and present.

In regards to the current Ebola crisis, an executive order update by President Obama has caused concern among civil liberties advocates, especially given the President’s otherwise lackluster response.

The executive order, known as the Revised List of Quarantinable Communicable Diseases, allows President Obama to apprehend and detain any American who simply shows signs of any “respiratory illness.”

The dictate becomes even more troublesome in light of the recent admission by Missouri doctor James Lawrenzi, who exclusively told the Alex Jones Show last week that potential-Ebola patients are being “disappeared” from hospitals without notice.

“These patients are disappearing, they’re doing something with the patients and God knows where they’re going,” said the doctor.

Whether the Obama administration’s dismal response is pure ignorance or an attempt to get the public to demand authoritarian control remains to be seen.