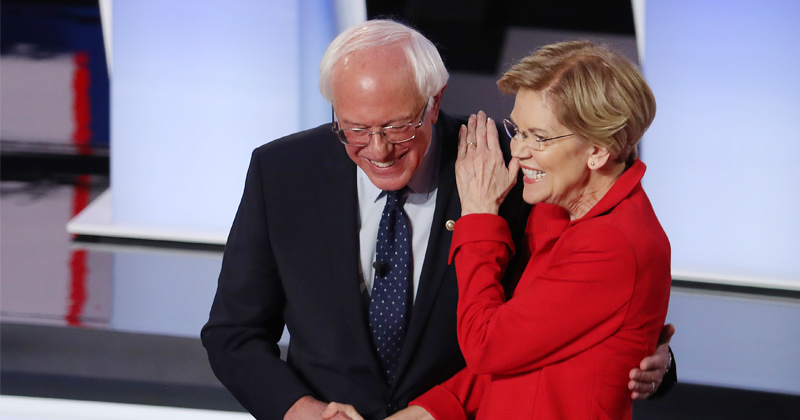 Seeing the Democrat debates has reminded Americans just how much of campaigning is promising something-for-next-to-nothing in attempts to buy electoral support. But when you think about historic Democrat bragging points, like Social Security and Medicare, that is not surprising.

They have long been “something for you today partly at someone else’s expense tomorrow” programs. In other words, they have been partial Ponzi schemes from the beginning.

While there have been many attempts to deny and confuse voters about the Ponzi-ness of those Democratic signature programs, the reason they are partly Ponzi schemes is very simple. After Social Security’s creation, those in or near retirement at the time got benefits far exceeding their “contributions,” which lasted for very few years. Giving those “excess” benefits over costs to the start-up generation meant that those resources would have to come from later generations of “players,” just like Ponzi schemes.

Every time the program expanded, another partial Ponzi scheme of excess benefits over costs was created for the initial group of beneficiaries, again inevitably at the expense of later generations. Another started when Social Security benefit levels doubled between 1950 and 52, and when they were raised 15 percent in 1970, 10 percent more in 1971, and 20 percent more in 1972. Another started when disability and dependents’ benefits were added in 1960. Still more were started when Medicare was added in 1966, and each time its benefits have been expanded (e.g., Medicare Part B, only one-quarter funded by recipients and Part D’s prescription drug benefit, only one-eighth funded by recipients).

So how has the modern Democrat party built on its proud legacy of such Ponzi schemes? By adding new ones.

Obamacare was also a partial Ponzi scheme, with a slightly different mechanism. Its policy to “limit premium variation based on age” forced insurance companies to under-charge those older, requiring them in turn to over-charge those younger. That bad actuarial deal was why younger people had to be forced to buy coverage (or were bought off by extending how long they could stay on their parent’s coverage). The consequence was that the coerced subsidy from the young allowed older recipients to get more than they paid for, which necessarily imposed an added burden on the next generation. Those near retirement age would also escape most of the future tax increases that would be part of funding it, adding to the inter-generational redistribution.

This January 30, over 200 Democratic co-sponsors returned to the older style of Medicare Ponzi scheme when they introduced the Social Security 2100 Act. It would increase all retirees’ benefits (including current retirees who would pay nothing toward the boost) and increase the inflation (over)adjustment for benefits, picking future high-income earners’ pockets to pay for the vast majority of it.

“Medicare for all” is also a partial Ponzi scheme. People are to get free medical benefits. But they must be paid for by income or other taxes. So what happens to those currently older? They get benefits for the rest of their lives while paying little in income taxes, since they are generally beyond or near retirement age. That excess of their benefits over their costs will again require imposing greater burdens on the earnings of those in the future.

That makes it important to remember that Democrats who are now promising a new something-for-next-to-nothing deal at the expense of later generations are from the same Ponzi party that in earlier years, promised those then older a great deal by sticking you with that tab and now defend those policies as their greatest hits.

However, while Democrats have historically led the charge in creating and doubling down on Social Security and Medicare Ponzi schemes (and scaring senior citizens into voting for them out of fear Republicans might put a stop to them), do Republicans offer serious hope for improvement? Some do, since many of who have publicly objected to such expanding Ponzi schemes have come from the libertarian leaning wing of the Republican party. But that subset doesn’t dictate Republican policy. And political history is not very encouraging when it comes to preventing the pillage of future generations. For instance, Social Security passed the House, 372 yeas to 33 nays, and the Senate, 77 yeas to 6 nays, before the conference report was passed on a plausible deniability preserving voice vote, which hardly shows either unified or effective opposition by Republicans. The benefit increases in the early 1970s resulted from a bidding war between Richard Nixon and Legislative Democrats to buy senior citizen votes. George W. Bush was the ramrod for the Medicare, Part D, expansion of unfunded liabilities. And when have you heard President Trump propose anything that would confront the unsustainable status quo in either Social Security or Medicare?

In fact, what seems to have dictated both parties’ policies, though to different degrees, is that present voters are willing to steal from future generations, many of whom do not yet get to vote, or are poorly informed or involved in the political process. That is, so long as the intertemporal redistribution is presented as “really” a noble and reliable political compact. So being clear that Social Security and Medicare are, at least in part, ignoble and unreliable (because they are unsustainable) political compacts of a sort we would put people in jail for if they did it in the private sector, may be the first small step toward any true hope of reform.

During a recent congressional testimony, the Intelligence Committee learns of the depths to which the Democrats are funded and answer to the ChiComs.