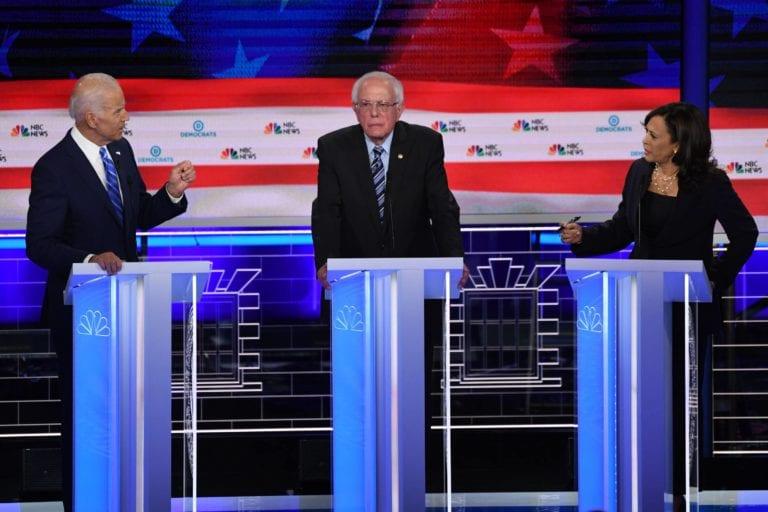 President Trump commented on the second Democratic Party primary debate as his meeting began with German Chancellor Angela Merkel at the Group of 20 summit in Japan:

“They definitely have plenty of candidates, that’s about it,” Trump said of the debate while seated next to Merkel.

“I look forward to spending time with you, rather than watching.”

“How about taking care of American Citizens first!?” he tweeted.

“That’s the end of that race!”

And if the extremist perspectives of the primary continue that may well be true.

As Liberty Nation’s Graham Noble details, the second night of debate was more feisty, more confrontational, and even more radical.

Night two of the first Democratic Party primary debate, featuring most of the heavy-hitters among the 25-strong field of candidates, promised to be less mundane than the first night. The event lived up to that promise, and most of the ten candidates seemed more feisty than their colleagues who debated on night one. The Democrats may be fatally flawed in their search for a candidate who can defeat President Donald Trump in 2020, though. That flaw is the fundamental misunderstanding of what America is all about.

Tune in to this Live Historic Broadcast as Alex Jones Phones in and Guest Host Attorney Robert Barnes Break Down The Democrat Debates and the ongoing Tyrannical Google Censorship Controversy.

There was far more confrontation, this time, between the candidates and whereas on the first night President Donald Trump was hardly mentioned, several of the second-night candidates launched hysterical and exaggerated attacks upon the man they aspire to replace.

The Pressure Of Competition

It may have been the lineup itself that spurred a more fierce and passionate exchange: Sens. Kamala Harris and Bernie Sanders, former Vice President Joe Biden and South Bend, Indiana Mayor Pete Buttigieg are all considered leading contenders for the Democratic nomination, and so the pressure was on for each of them to stand out.

For those other candidates who may be considered less likely to make the stage at the 2020 Democratic Party convention, the opportunity to hold their own against the front-runners was too good to pass up.

The Common Theme Of Socialized Healthcare

Following the same format as the previous night’s debate, the first half-hour was devoted to the issue of healthcare. The candidates touted variations of the same policy goal, which is to take the nation into a government-run, single-payer system. Sanders and Harris were the only two candidates who signaled their intention to completely do away with private health insurance.

It is worth noting that, even in European countries operating variations of socialized healthcare systems, private insurance is still an option. Removing even the possibility of a private option is an extreme position even when viewed through a global perspective.

Sanders claimed that, under his system, Americans would be able to choose their doctor and choose which hospital they visit, but the nation has heard that before. In a single-payer system with no private option, this is quite simply a false promise. Interestingly, every candidate pledged that their respective healthcare policies would include coverage for illegal aliens.

As with the first round of this debate, the discussion spanned gun violence, immigration, climate change, and foreign policy. As with the first round, there were all kinds of vague promises to quickly solve all these problems – often “on day one” of the new president’s term. One wonders how these issues have not been long ago resolved if they were all so simple to deal with.

Sen. Harris will almost certainly be considered the biggest winner of the night.

[ZH: Certainly judging once again based on Google Search interest, Harris was the clear winner]

Her first opportunity to speak came as several candidates were already talking over each other. When finally the moderators calmed the crosstalk, Harris said “Guys, you know what? America does not want to witness a food fight; they want to know how we’re going to put food on the table.” It was a good line and Harris continued to make an impression – at one point, directly confronting Biden over his recent comments about working with segregationists in the Senate.

For his part, Biden leaned heavily on his political resume. He began almost every one of his answers to moderators’ question by pointing out that “I’m the only guy” to get this or that done. He also asserted that he would not support any attempt to get rid of Obamacare.

The former VP is currently well ahead in the polls, and he got plenty of speaking time, though he did not put on a stellar performance. His campaign strategy is clear: Portraying himself as the most experienced candidate and trying to outdo his competitors in attacking the president. It is hard to escape the feeling, however, that the party’s base may be more attracted to younger blood and fresher ideas.

Mayor Buttigieg spoke well and held his own but was not remarkable. He did himself no harm in the debate, though, and is likely to remain competitive in the race for the nomination, even though he brings nothing unique to the contest. His plan, like all the others, is to give out free stuff and hope that, somehow, he can tax the wealthy and the corporations in perpetuity to pay for it all.

Rep. Eric Swalwell (D-CA) did little to boost his campaign and he was not alone in failing to leave an impression. Sen. Gillibrand (D-NY) chimed in frequently and constantly went over her allotted time. It was clear she desperately needed the attention and who can blame her for not seizing the opportunity? Like Swalwell, however, she failed to leave her mark.

Bernie Sanders appeared to be fading; his performance in the debate may well give his campaign a new lease on life. The Vermont senator is always the angry, socialist revolutionary, though, who is entirely incapable of speaking to people – instead, he lectures and, although his strident tone may appeal to many young, uninformed idealists, it will not win over a large enough number of Americans to secure him a victory against Trump. He always sounds like the grumpy old man yelling at kids to get off his lawn and constantly telling everyone how terrible things are when, in fact, they are really not that terrible is not a winning strategy.

Two people on the stage shared the distinction of not being politicians, though they are not at all similar and their respective fortunes in this race will likely be very different. Entrepreneur and philanthropist Andrew Yang has a unique and fairly non-partisan approach to domestic and economic policy. He acquitted himself well in the debate, clearly demonstrating that he has a better head for figures than any other candidate. The question for Yang, though, is whether he can capture the imagination of the party’s primary voters. Given the competition, his chances are slim.

Author Marianne Williamson was given very little opportunity to speak and appeared to have no specific policy ideas, though she did make what was, perhaps, the most perceptive observation of the night. Having listened to the various, vague plans presented to solve all the nation’s ills – real or perceived – Williamson said: “[Trump] didn’t win because he had a plan, he won by simply saying “Make America great again.”

Flawed Thinking And Lack Of Vision

Therein lies the flaw in Democrat thinking: Single-issue candidates and policy wonks do not win presidential elections. The victorious candidate is the man or woman with the biggest and broadest ideas and the most optimistic vision. Reagan, Obama, and Trump are all good examples. Going back further into American political history, Franklin D. Roosevelt and John F. Kennedy were other examples.

Every one of these Democratic candidates is promising a vision of a vast central government administering almost every aspect of American life. They are gambling on persuading the nation that government alone can make life better and that, somehow, only the government is able to create cost-effective and efficient solutions. They are promoting a massive, administrative state when, at no point in history, has such system produced efficiency, economic prosperity, more freedom, and less corruption.

When all is said and done, the Democratic message to the American people is: “Your life sucks and your country is awful, so get your revenge by giving us all the power.” Moreover, Americans traditionally do not get enthusiastic about the idea of the government telling them it knows better than they do how to run their lives.

Even worse for the Democratic Party is that none of these candidates, save one, has the kind of sweeping vision that captures the imagination of the public. For all their proposed solutions and “free” government services, they are not big thinkers. Sanders alone has a big, radical, transformative vision but his would lead, ultimately, to a Soviet-style government and there are still too many voting Americans who are old enough to remember the horrors that regime.