The U.S. government has stolen $15,876,457,645,132.66 from future generations of Americans, and we continue to add well over a hundred million dollars to that total every single day day. The 15 trillion dollar binge that we have been on over the past 30 years has fueled the greatest standard of living the world has ever seen, but this wonderful prosperity that we have been enjoying has been a lie. It isn’t real. 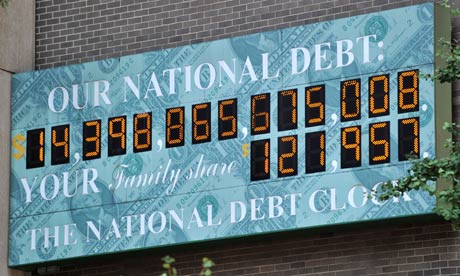 We have been living way above our means for so long that we do not have any idea of what “normal” actually is anymore. But every debt addict hits “the wall” eventually, and the same thing is going to happen to us as a nation. At some point the weight of our national debt is going to cause our financial system to implode, and every American will feel the pain of that collapse. Under our current system, there is no mathematical way that this debt can ever be paid back. The road that we are on will either lead to default or to hyperinflation. We have piled up the biggest debt in the history of the world, and if there are future generations of Americans they will look back and curse us for what we did to them. We like to think of ourselves as much wiser than previous generations of Americans, but the truth is that we have been so foolish that it is hard to put it into words.

Well you know what?

Both parties are to blame. Both of them get a failing grade.

If the Republicans really wanted to stop the federal government from running up all this debt they could have done it.

If the Democrats really wanted to stop the federal government from running up all this debt they could have done it.

So let’s not pretend that one of the political parties is “the hero” in this little drama.

The damage has been done, and both parties will go down in history as being grossly negligent on fiscal issues during this period of American history.

Sadly, neither party is showing any signs of changing their ways.

Neither Barack Obama nor Mitt Romney is promising to eliminate the federal budget deficit in 2013. They both talk about how the budget will be balanced “someday”, but as we have seen so many times in the past, “someday” never comes.

I didn’t mean to get all political in this article, but the truth is that the national debt threatens to destroy everything that previous generations have built, and our politicians continue to give us nothing but excuses.

The following are 27 things that every American should know about the national debt….

#2 If the average interest rate on U.S. government debt rises to just 7 percent, the U.S. government will find itself spending more than a trillion dollars per year just on interest on the national debt.

#3 If right this moment you went out and started spending one dollar every single second, it would take you more than 31,000 years to spend one trillion dollars.

#4 Since Barack Obama entered the White House, the U.S. national debt has increased by an average of more than $64,000 per taxpayer.

#5 Barack Obama will become the first president to run deficits of more than a trillion dollars during each of his first four years in office.

#6 If you were alive when Jesus Christ was born and you spent one million dollars every single day since that point, you still would not have spent one trillion dollars by now.

#7 The U.S. national debt has increased by more than 1.6 trillion dollars since the Republicans took control of the U.S. House of Representatives. So far, this Congress has added more to the national debt than the first 97 Congresses combined.

#9 If Bill Gates gave every single penny of his fortune to the U.S. government, it would only cover the U.S. budget deficit for 15 days.

#10 As Bill Whittle has shown, you could take every single penny that every American earns above $250,000 and it would only fund about 38 percent of the federal budget.

#11 Today, the government debt to GDP ratio in the United States is well over 100 percent.

#12 A recently revised IMF policy paper entitled “An Analysis of U.S. Fiscal and Generational Imbalances: Who Will Pay and How?” projects that U.S. government debt will rise to about 400 percent of GDP by the year 2050.

#13 The United States already has more government debt per capita than Greece, Portugal, Italy, Ireland or Spain does.

#14 At this point, the United States government is responsible for more than a third of all the government debt in the entire world.

#15 The amount of U.S. government debt held by foreigners is about 5 times larger than it was just a decade ago.

#16 The U.S. national debt is now more than 22 times larger than it was when Jimmy Carter became president.

#17 It is being projected that the U.S. national debt will surpass 23 trillion dollars in 2015.

#18 Mandatory federal spending surpassed total federal revenue for the first time ever in fiscal 2011. That was not supposed to happen until 50 years from now.

#21 U.S. households are now actually receiving more money directly from the U.S. government than they are paying to the government in taxes.

#22 The U.S. government is wasting your money on some of the stupidest things imaginable. For example, in 2011 the National Institutes of Health spent $592,527 on a study that sought to figure out once and for all why chimpanzees throw poop.

#23 If the federal government used GAAP accounting standards like publicly traded corporations do, the real federal budget deficit for last year would have been 5 trillion dollars instead of 1.3 trillion dollars.

#24 The Federal Reserve purchased approximately 61 percent of all government debt issued by the U.S. Treasury Department during 2011.

#25 At this point, the U.S. national debt is more than 5000 times larger than it was when the Federal Reserve was first created.

#26 If the federal government began right at this moment to repay the U.S. national debt at a rate of one dollar per second, it would take over 480,000 years to completely pay off the national debt.

#27 The official government debt figure does not even account for massive unfunded liabilities that the U.S. government will be hit with in the years ahead. According to Professor Laurence J. Kotlikoff, the U.S. government is facing a future “fiscal gap” of more than 200 trillion dollars.

As the U.S. economy continues to crumble, even more Americans are going to become financially dependent on the federal government.

The government has been targeting Spanish speakers with radio “novelas” promoting food stamp usage as part of a stated mission to increase participation in the Supplemental Nutrition Assistance Program (SNAP), or food stamps.

Each novela, comprising a 10-part series called “PARQUE ALEGRIA,” or “HOPE PARK,” presents a semi-dramatic scenario involving characters convincing others to get on food stamps, or explaining how much healthier it is to be on food stamps.

I’m all for helping those that cannot feed themselves, but do we really need to run ads urging more people to become dependent on the government?

Of course Obamacare is going to cause our debt to balloon in size as well. It is being projected that Obamacare will add more than 2.6 trillion dollars to the U.S. national debt over the first decade alone.

So where are we going to get all this money?

We can’t keep spending money that we do not have. We have got to prioritize. Every single category of government spending needs to be cut.

But instead we feel like we can keep ripping off future generations of Americans and that we will always be able to get away with it.

What we have done to our children and our grandchildren is beyond criminal.

The truth is that we should have listened to the warnings of our founding fathers about government debt. For example, Thomas Jefferson once said that if he could add just one more amendment to the U.S. Constitution it would be a complete ban on all borrowing by the federal government….

I wish it were possible to obtain a single amendment to our Constitution. I would be willing to depend on that alone for the reduction of the administration of our government to the genuine principles of its Constitution; I mean an additional article, taking from the federal government the power of borrowing.

Where would we be today if we had taken the advice of Thomas Jefferson?