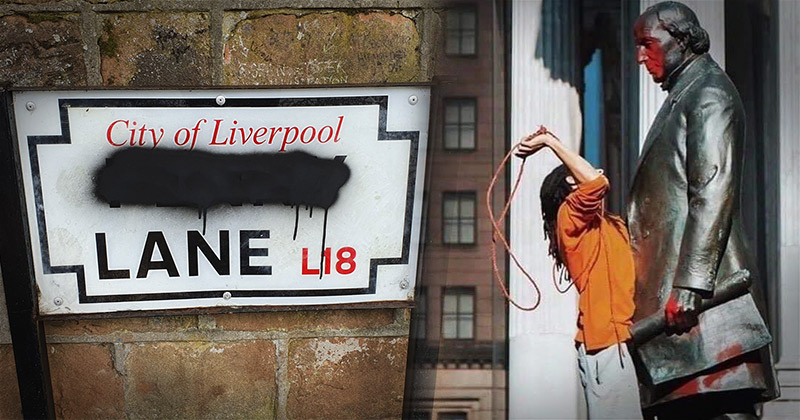 Most people already know the far-left “protesters” destroying property and historical monuments around the world aren’t the sharpest tools in the shed, but these three incidents prove how ignorant they truly are.

First, left-wing agitators in Pennsylvania threw red paint and a noose on a Matthias Baldwin statue outside Philadelphia’s City Hall on Wednesday.

Baldwin was a famous American abolitionist who “argued for the right of African Americans to vote in Pennsylvania during the state’s 1837 Constitutional Convention, & helped establish a school for African American children where he paid teachers’ salaries for years,” according to National Review.

Despite this important contribution to black America, Baldwin’s monument was desecrated and he was labeled a “colonizer” and “murderer” by spray paint written on the statue’s base.

Early abolitionist Matthias Baldwin “argued for the right of African Americans to vote in Pennsylvania during the state’s 1837 Constitutional Convention, & helped establish a school for African American children where he paid teachers’ salaries for years.” https://t.co/XXG239QSjr pic.twitter.com/2F30OeraGf

Rioters in Philly deface a statue of Matthias Baldwin, an early abolitionist who fought against slavery 30 years before it ended. pic.twitter.com/1HKrDusPBh

The street, made popular by The Beatles song “Penny Lane” commemorating their hometown of Liverpool, had nothing to do with James Penny, according to city tour guide Jackie Spencer.

The word Penny was spray-painted over multiple signs and the word “racist” was written behind one of the vandalized signs.

The mob defaced the Penny Lane sign in Liverpool because they erroneously thought it was named after a slave trader.

Their idiocy is now starting to hilariously backfire. https://t.co/E7ztmUlh9b

Locals quickly took action to clean the damaged property in their neighborhood.

Popped down to Penny Lane to get pictures on the graffiti to find the community already hard at work cleaning the signs. Real anger here. THERE IS NO CONNECTION BETWEEN PENNY LANE AND JAMES PENNEY THE SLAVE TRADER pic.twitter.com/xRukv7m4op

The final example of leftist demonstrators showing off their stupidity comes out of Oxford, UK, where two young men stood advocating for the removal of a statue of the late British politician Cecil Rhodes.

When asked by a reporter why they support the tearing down of the statue, one of the men responded, “To be honest, I don’t actually know who he is.”

Yesterday’s protest at Oxford for the removal of the Rhodes statue…
” To be honest I don’t even know who he is” – BLM protester pic.twitter.com/dkz7rOfUL0

A website dedicated to the memorial writes, “The most acclaimed piece of sculpture on Boston Common is the Robert Gould Shaw and Massachusetts 54th Regiment Memorial by Augustus Saint-Gaudens; a memorial to that group of men who were among the first African Americans to fight in the Civil War. The monument portrays Shaw and his men marching down Beacon Street past the State House on May 28, 1863 as they left Boston on their way to South Carolina, Shaw erect on his horse, the men marching alongside.”

They defaced the monument to the 54th Massachusetts regiment.

This is the first monument ever erected to celebrate the achievements of a black military unit. (See the 1989 film Glory.)

This stupidity has to stop. pic.twitter.com/LCWB0NtEEr

If you’re planning on targeting a historical monument, perhaps brush up on your history beforehand.