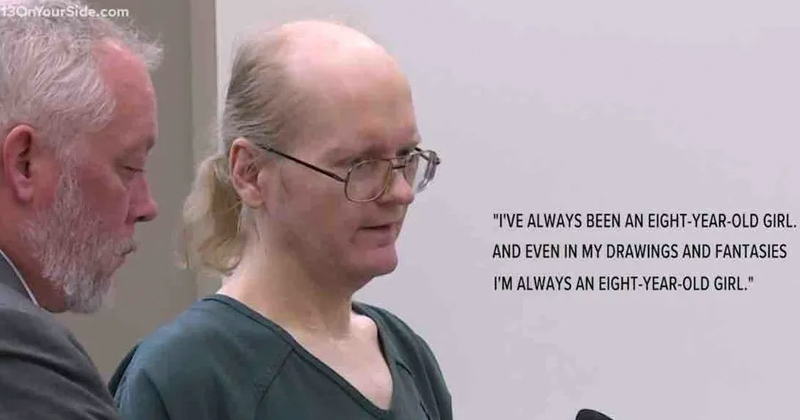 A Michigan man facing charges for possessing child pornography defended himself by claiming he identifies as an eight-year-old girl and therefore should have his rights protected under the First Amendment.

Police found child pornography at the Grand Rapids home of Joseph Gobrick, 45, back in 2018 after he was arrested when a missing 17-year-old Ohio girl turned up at his house.

Gobrick’s collection reportedly contained over 50 pornographic images of everything from infants to 5-year-olds, and police were able to identify at least eight victims who were sexually assaulted.

Last week at a sentencing trial, Gobrick continued to defend his actions by mounting an unusual defense.

“Whenever we did this, there are adults having sex with me in an online forum as an eight-year-old,” he stated.

Gobrick also attempted to draw comparisons between how he was being treated and the oppression of Jews in the Auschwitz concentration camp.

“Under the law, Auschwitz was legal,’’ Gobrick said. “What you’re doing here is wrong, just as Auschwitz was.”

He also tried to claim many of the images were protected by the First Amendment because they were animated or illustrations, and said he would never have sex with a child because it was unsafe.

“I would no sooner have sex with a child than you would with a rattlesnake,” Gobrick told Kent County Circuit Court Judge Paul Denenfeld. “It’s just not safe.”

Kent County Assistant Prosecutor Daniel Helmer argued Gobrick was “a danger to the public,” and pointed to his comments and perverted drawings as proof.

“Even during the trial, the defendant continued to draw, talking about raping babies in the Kent County Jail and making other statements about how this is his constitutional right to continue to do so,” Helmer said.

This wasn’t Gobrick’s only bizarre legal move – at a bench trial in November, Gobrick had rejected his court-appointed attorney to represent himself.

Ultimately, Judge Denenfeld found Gobrick guilty on 3 counts of child sex crimes and sentenced him to between 10 and 20 years behind bars.

“The reality is Mr. Gobrick not just engaged in misconduct, but he obviously doesn’t think that child sexually abusive material is wrong,” the judge stated, adding, “This isn’t just virtual stuff; this is also real people that are being harmed,”

The Clinton’s had their own little village on Epstein’s pedo-island. A psychologist warns us we better realize Epstein, Clintons, Jimmy Saville, Dennis Hastert, etc are not aberrations but typical of the elite.