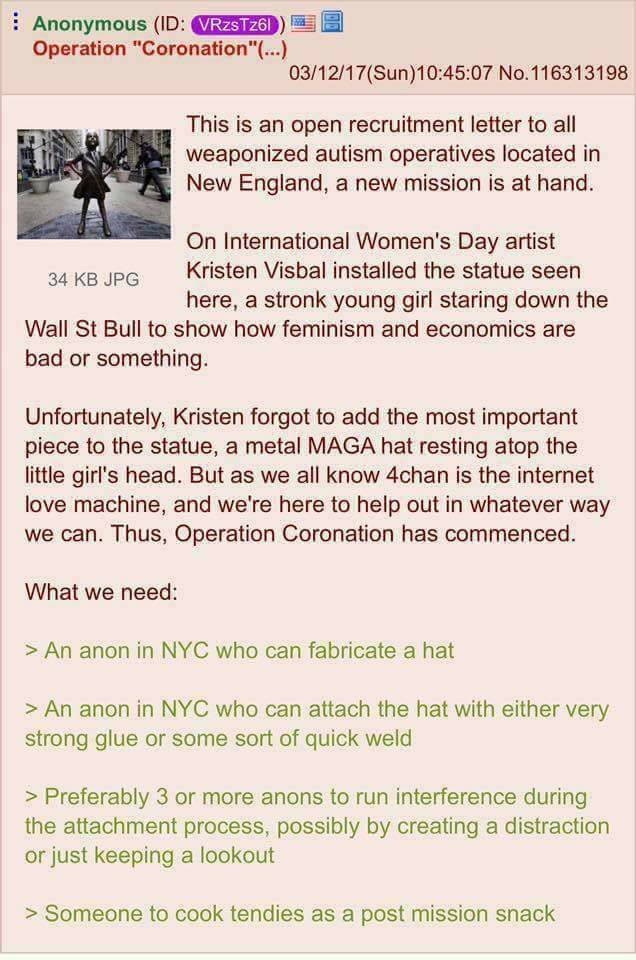 The culture commandos from 4Chan continue to quietly execute counter-leftism operations, with their latest mission targeting the establishment-funded “Fearless Girl” statue in New York City which feminists worshiped since its erection.

After last week’s stunning takedown of Shia LaBeouf and the latest iteration of his anti-Trump He Will Not Divide Us exhibit in Operation: Orion, a 4Chan user proposed the parameters for Operation: Coronation, aimed at a bronze sculpture that recently popped up in faux Banksy-esque guerilla style on the eve of ‘International Women’s Day,’ opposite the Wall Street Bull statue.

After a lengthy discussion in the ensuing thread, cooler heads prevailed, and instead of attempting to deface the sculpture with a weld, a compromise was reached.

One user proposed, “Don’t over do it, make it simple and to the point. This is just a temporary solution and likely not going to be a permanent weld job since it has a 100% chance of being taken off plus we don’t need anons to go to jail.

Strong glue and hat, someone with a backpack. Casual stroll, laugh, put hat on statue, take glorious picture, end troll. Walk away pretending to have forgotten your hat.”

And so it was done – 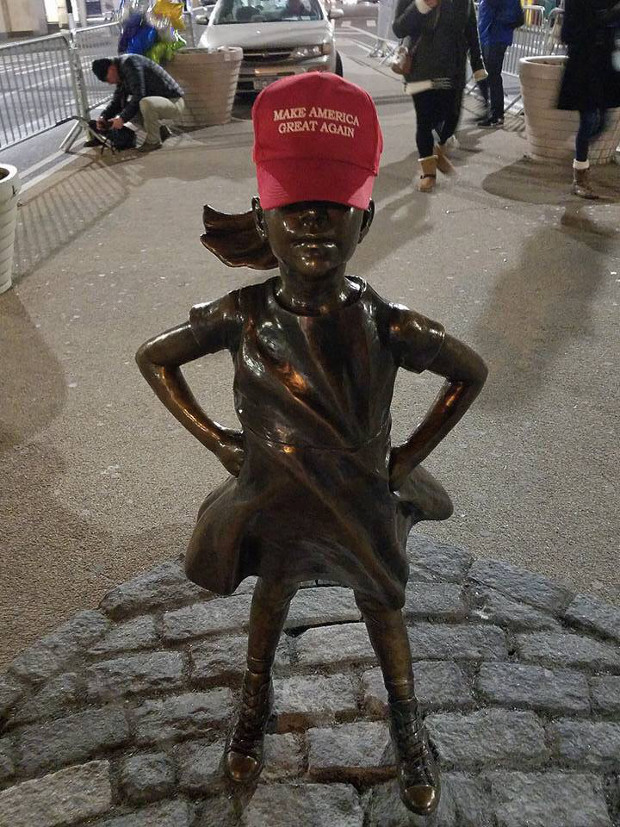 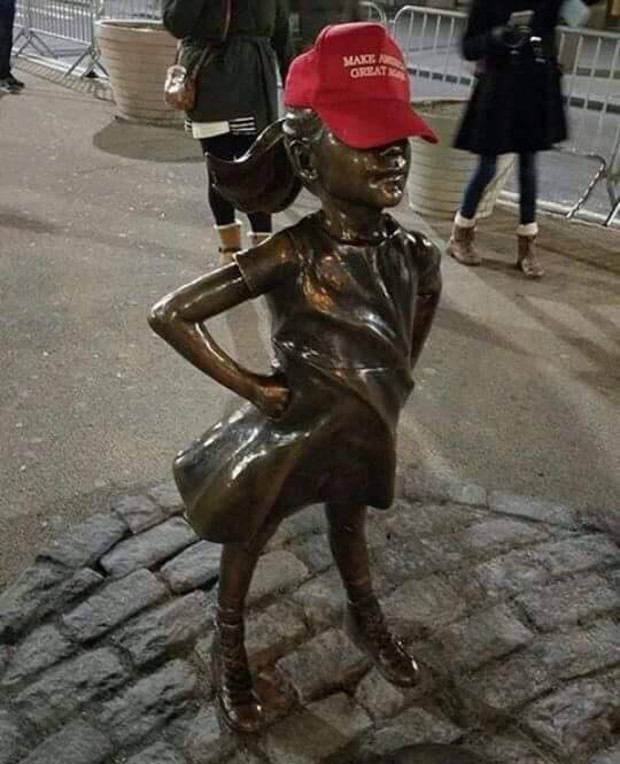 Shortly after, social media user and proud feminist Alexis Kaloyanides shared an image of a man dancing with Fearless Girl, claiming that he had been “humping” it, and proclaimed, “Douchebags like this are why we need feminism.” 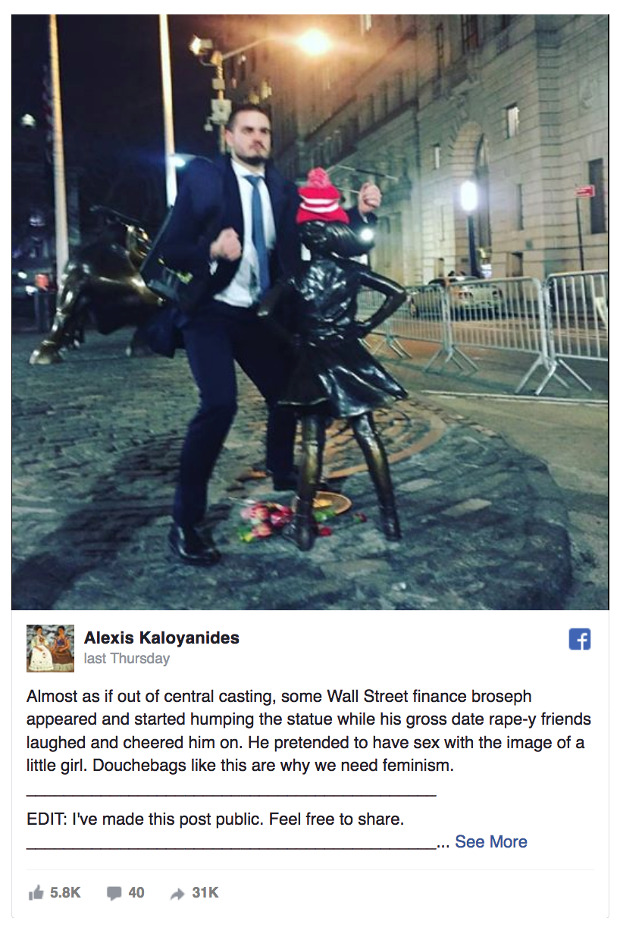 Inside Edition took notice of Kaloyanides’ post, and in an interview she elaborated her sentiments about the traumatizing moment in which the inanimate chunk of metal was defiled by the assumed “Wall Street finance broseph.”

“This is just further perpetuating a mentality of ‘boys will be boys,’ and that ‘it’s okay, it’s a joke, just brush it off,’” she said. “This young man likely has a mother, a sister perhaps, a girlfriend, a wife — who knows? I’m getting tired of making excuses and laughing it off. I for one am not gonna laugh it off anymore.”

This is rape culture. https://t.co/Eswp46lebT

Twitter users responded in kind, pointing out the hypocrisy of leftists who cheapen the meaning of ‘rape culture’ while fully supporting, protecting and inviting the truly vicious rape culture of Sharia Law, which ‘Women’s March’ co-organizer and feminist darling, Linda Sarsour, defends and promotes vehemently.

@NYCMayor Wanna see rape culture? Send your daughter to the Middle East. Tell them to NOT wear the #hijab that you #Leftists defend. #WTF

That awkward moment when you realize the organizer of the #WomensMarch is pro Sharia Law, the very opposite of women's rights. #AddHerName pic.twitter.com/r3AZywd9oA

As with most agitprop designed to fire up and rally gullible leftists (like the Soros-funded ‘Women’s March’), “Fearless Girl” is AstroTurf, having been commissioned by State Street Global Advisors, the world’s third largest asset manager, and installed by global advertising titan, McCann Worldwide, under permission of the city.

The Village Voice reports on the glaring hypocrisy: “The statue is meant to draw attention to a larger initiative by SSGA, which announced today that it will be encouraging companies it invests in to have more women on their boards of directors. A quick perusal of SSGA’s own leadership turns up five women out 28 top executives, making its leadership 82 percent male (and 96.5 percent white).”

“SSGA is a division of the State Street Corporation, which includes a banking division overseeing $28 trillion dollars. Of the corporation’s 11 directors, eight, or 72 percent, are men.”

This is an historic day: the Wall Street bull statue has been joined by a little girl symbolizing gender disparity and women leadership. pic.twitter.com/K6HyvLTAVq 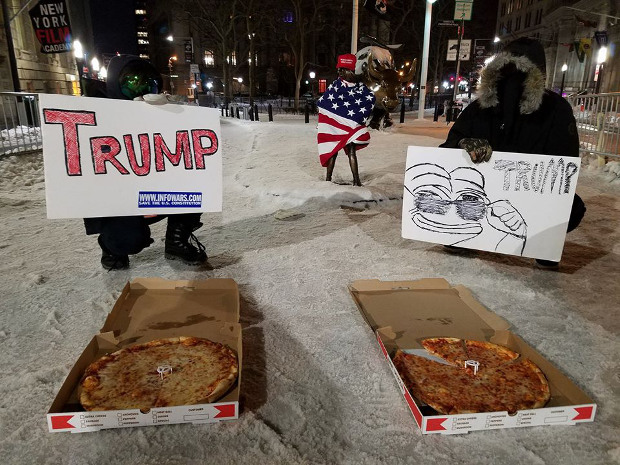