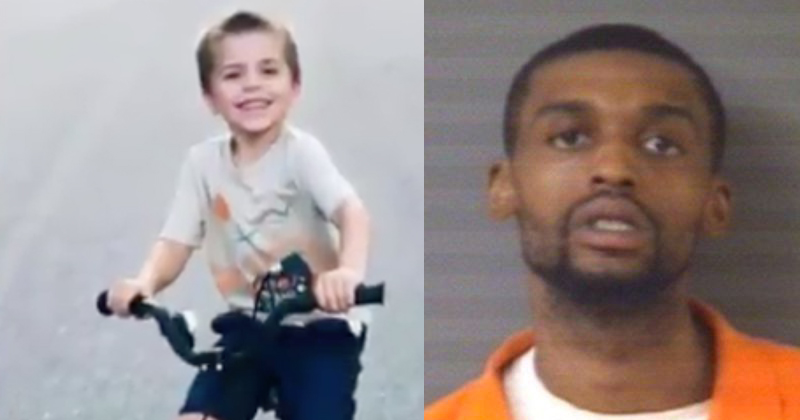 A five-year-old was shot in the head execution-style while playing in the street – and police charged a 25-year-old neighbor with murder.

Darius Sessoms was charged with first-degree murder by US Marshals barely a day after Cannon Hinnant was shot in front of his father’s house in Wilson, N.C., on Sunday night while riding his bicycle.

A witness says Sessoms walked up to the child who lives next door and opened fired before running away, according to media.

“My first reaction was he’s playing with the kids,” she said. “For a second, I thought, ‘That couldn’t happen.’ People don’t run across the street and kill kids.”

Tragically, there were two other witnesses: Hinnant’s two sisters, aged eight and seven who were also playing outside.

Police say the shooting was not random, with one family member further claiming it was because the five-year-old rode into Sessoms’ yard.

“One minute he is enjoying his life, the next it all ends because he rode into his neighbor’s yard,” a GoFundMe page created by Hinnant’s cousin states. “Five-years-old guys!! Nothing prepares a parent for the loss of their child.”

“No child should ever have their future stolen from them.”

The news went viral on social media despite it going practically unreported by major news outlets for the past two days, which led to accusations they were ignoring the story because it didn’t fit into an ongoing narrative.

The Daily Mail has it – but here only local outlets, no US Major outlets. Looking at you @CNN @foxnews @ABC @CBSNews @NBCNews Regardless of black white or otherwise: a child was shot in the head in broad daylight. #CannonHinnant pic.twitter.com/5oOxRzOwjP

Say his name. 5 year old Cannon Hinnant was executed in cold blood while riding his bike. The accused killer is Darius Sessoms. He allegedly walked up to the boy and shot him dead in front of his sisters. Reverse the races and this is the only thing anyone talks about for a month pic.twitter.com/5V72YhAOlI

Local media also reported that Sessoms and the boy’s father had dinner together Saturday night and that Sessoms had visited their home earlier on Sunday.

Don’t miss this hilarious throwback to the campaign trail where Kamala Harris receives a smack down from Tulsi Gabbard.