from the sad dept

Fifty three years ago today, President Dwight Eisenhower gave his famous speech warning of the military-industrial complex. It’s quite a speech, and well worth reading, listening to or watching. But, the famous lines are the ones that still rings true today:

In the councils of government, we must guard against the acquisition of unwarranted influence, whether sought or unsought, by the military-industrial complex. The potential for the disastrous rise of misplaced power exists and will persist.

We must never let the weight of this combination endanger our liberties or democratic processes. We should take nothing for granted. Only an alert and knowledgeable citizenry can compel the proper meshing of the huge industrial and military machinery of defense with our peaceful methods and goals, so that security and liberty may prosper together.

The White House claims that it’s a mere coincidence that President Obama has chosen the anniversary of that speech to give his speech, outlining what are expected to be merely cosmetic reforms to the NSA’s surveillance efforts, still convinced that even if the programs are incredibly broad and powerful, that it’s okay since he won’t abuse them.

The folks over at EFF have put together scorecard of NSA reforms that the President should announce. You can play along at home and check off which ones the president actually supports, but I wouldn’t rush to sharpen your pencils. You’re not going to see too many checked boxes on this chart. 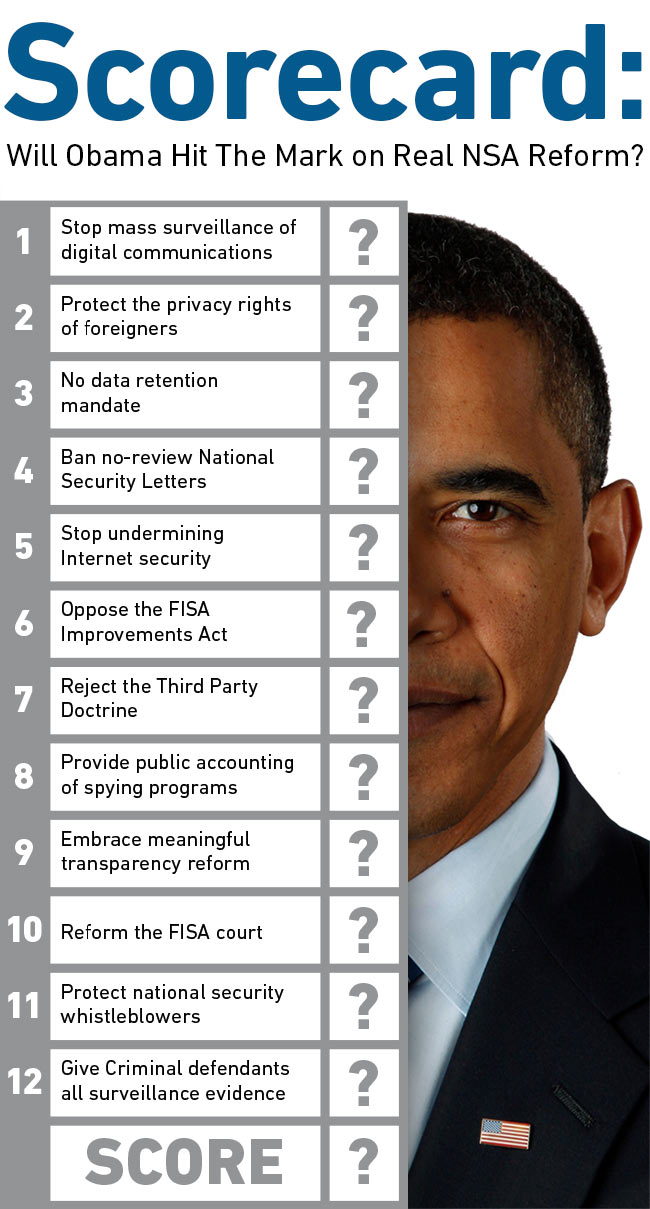 Eisenhower noted that a true leader is focused on the goals of a free society, understanding technological change, and the influence of corporate interests, but keeping focused on the larger goal of protecting freedom:

It is the task of statesmanship to mold, to balance, and to integrate these and other forces, new and old, within the principles of our democratic system — ever aiming toward the supreme goals of our free society.

The current president would do well to reread and to think about Eisenhower’s words, but it appears that is not likely to happen.