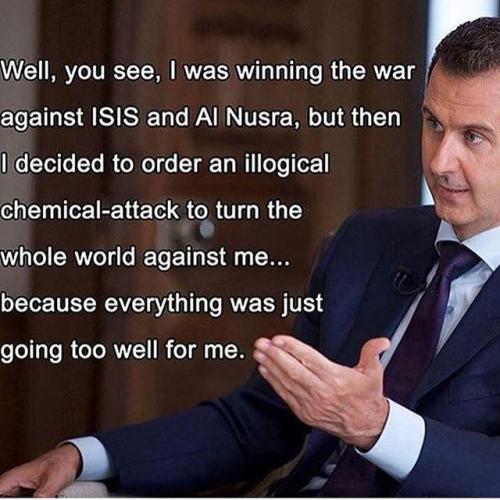 Editor’s note: We’ll discuss all these key points today and Friday during our live 34-hour emergency broadcast to STOP THE WAR.

POTUS Trump knows that the chemical attack in Syria is a hoax and false flag.

The mainstream media knows that the chemical attack in Syria is a hoax and false flag.

All of Congress knows that the chemical attack in Syria is a hoax and false flag.

The entire world knows that Assad is not that stupid (he is a doctor and ophthalmologist) so as to gas women and children at the very moment he is winning the war in Syria…launching a chemical weapons strike for shits and giggle, moments after Trump announced a US pullout from Syria.

Here are six very simple reasons why Trump will go to war in Syria, all of which have nothing to do with a trumped up “heinous” chemical attack from an “animal” dictator, or spreading democracy to the Middle East…

“The Chinese have recently issued the gold backed Yuan, which they, and others, have vowed to use to sell/purchase oil (amongst other things).

The last two nations that tried to introduce a currency to compete against the petrodollar were Libya and Iraq. The US needs that pipeline through Syria even more than ever now, especially if they are to compete for European gas/oil markets (presently controlled by Russia and their pipeline) and the Chinese Yuan.

2. John McCain and the MIC:

McCain is the Deep State president, and the number one war salesman for the military industrial complex.

Libya, Ukraine, Syria…McCain is the angel of death, and the MIC sends him around the world to arm neo-nazis in Ukraine, Al Qaeda terrorists, ISIS head choppers, and any other group that is willing to start fake “civil wars” or illegal “coups”, all for the profit of the military industrial complex.

Saudis crown prince just wrapped up a US PR tour and is now in France.

Western leaders and mainstream media “liberals” are creaming in their pants over the Saudi leader, hailing him as a visionary, renaissance man.

They fail to report on how MbS is slaughtering Yemeni citizens by the thousands, or how his Saudi dictatorship is one of the most repressive regimes in the world.

Also forgotten is that Saudi Arabia supported Al Qaeda during the 9/11 terrorist attack, and are admittedly funding and training Al Qaeda and ISIS terrorists in Syria…terrorists that make their way to Europe, and eventually run over innocent people with cars and trucks.

No matter…MbS (and his billions in cash) has the ear of Trump and Macron…now both the US and France are giddy about attacking Syria.

Israel has been itching to destroy Syria for decades.

They struck Syria’s T-4 airbase in Homs province, without warning or just cause. Five out of eight missiles found themselves neutralized.

Three, however, found their mark – the western part of the airbase, as The Duran reported.

According to NBC news, Israel informed the United States prior to their strike on the Syrian base, but did not warn Russia.

Russian military could have been present at the Syrian base during the attack, yet Israel did not warn Moscow.

In its actions, Israel is trying to create the trip wire necessary to propel the world towards a hot war between the United States and Russia.

Israel’s goal…take over Syria, or at the very least install a government in Damascus that will report directly to Israel.

5. Cover up past and present American, Deep State false flags in Syria:

Russia’s control of Douma, and its ability to now conduct a full investigation is a big reason why the Deep State is so eager to bomb Syria as soon as possible.

As a result of the total surrender of the Jihadis previously in control of Douma on Sunday, it is the Russian military who this time are in control of the alleged crime scene.

This has put the Russians in a position where for the first time they are able both to invite the OPCW inspectors to attend the crime scene and to provide them with protection if they are there, whilst at the same time monitoring and supervising their work.

If the chemical attack on Douma really is fictitious – as the Russians insist it is – then for the first time their control of the crime scene puts the Russians in a strong position to prove it.

The point was made forcefully by Russia’s UN ambassador Vassily Nebenzia at the UN Security Council session today, and it also received indirect backing from the UN Secretariat, who admitted that they could not confirm that a chemical weapons attack had happened, and who called upon all sides to show restraint until a proper investigation of the incident had taken place.

Nebenzia followed this up by inviting OPCW inspectors to the scene as early as tomorrow Tuesday.

By now it should surprise no-one that the fact that the Russians are in control of the crime scene and may on this occasion be able to prove conclusively that no chemical weapons attack happened in Douma, instead of deterring a US attack, is actually making it more likely.

This is because the credibility of the various ‘witnesses’ to the Douma attack – who are of course the same witnesses who were previously ‘witnesses’ to the 2013 East Ghouta and the 2017 Khan Sheikhoun attacks – is now on the line, as is the credibility of those Western governments – first and foremost the US government – who believed or who pretended to believe them.