72% of the poor and 71% of the middle-class believe government policies (fiscal and monetary) have done little or nothing to help them. Of course, this will be eschewed by the academics (as Santelli recently exclaimed regarding the arrogance of the intellectuals) because “the people” just don’t get it. But when 69% of all Americans, according a new Pew study, say large banks and financial institutions have benefited the most from post-recession government policies; communications policies are going badly awry. Despite a surging stock market, exploding home prices, and low rates spurring all kinds of subprime auto loan exuberance, there has been little change in these perceptions since July 2010.

The public sees clear winners and losers as a result of the government’s economic policies following the recession that began in 2008.

In the public’s view, the beneficiaries of these policies are large banks and financial institutions, large corporations and wealthy people…

Roughly seven-in-ten say government policies have done little or nothing to help the poor (72%), the middle class (71%) and small businesses (67%).

The public had a dim view of assistance that the government gave to banks and financial institutions during the recession, after the 2008 fiscal meltdown threatened many of them. A Feb. 2012 survey found that 52% of Americans thought bailing out the banks through the Troubled Asset Relief Program (TARP) was the wrong thing to do, while 39% supported the action.  That was a big turnaround from 2008 when the crisis hit in 2008 and 57% had said TARP was the right thing to do.

Overall, 40% say that the job situation is the national economic issue that worries them most, while somewhat fewer cite the budget deficit (24%) or rising prices (22%); just 10% say the condition of the financial and housing markets is their top economic worry. 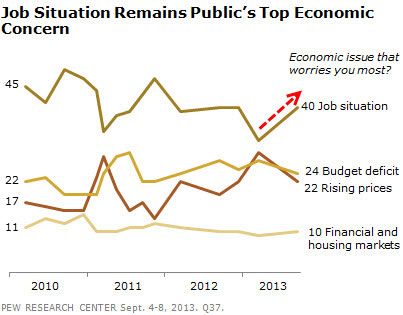 The belief that the U.S. economic system is no more secure today than it was before the financial crisis is widely shared across demographic groups. There are partisan differences, however, with Democrats more likely than Republicans or independents to say that the system is more secure. 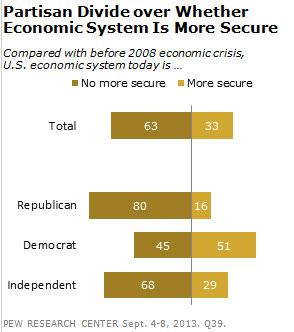 Large majorities of Republicans (80%) and independents (68%) say the economic system is not more secure than prior to the financial crisis. Democrats are divided: 51% say the system is more secure today while 45% say it is not.