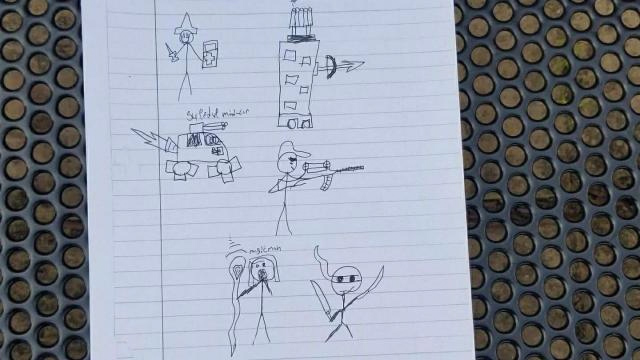 A 7th grade student in North Carolina was suspended for drawing a stick figure armed with a gun.

In what sounds like a satirical story from The Onion, Roseboro Salemburg Middle School suspended a 13-year-old boy two weeks ago for nothing more than a few harmless doodles.

The student’s father, James Ray Herring Jr., says there was nothing wrong with the drawings, one of which was a Teenage Mutant Ninja Turtle.

“I see a guy in a race car souped-up. I see a tower that he built. I see him holding his gun, he’s a deer hunter. I see him with a magician and I see him as a Ninja Turtle,” Herring said. “(He’s) just expressing himself, nothing violent.”

Herring said his son hunts, but added that all firearms are safely stored at home.

“I can see if he had it where he was blowing up people, had some hate words or something like that, but that picture is totally innocent,” added Herring.

The school’s superintendent, on the other hand, argued the drawings could have met one of the school’s threat categories, and cited the current anti-gun culture for the decision.

“There are some things that list possible threats or things like that. We have categories – category one, two, three and four – which sort of grades potential incidents and the level of seriousness,” said Sampson County Superintendent Eric Bracy.

“Due to everything happening in the nation, we’re just being extra vigilant about all issues of safety,” Bracy explained.

Herring’s father says the punishment was too severe for something that’s normal for kids to do.

“They could have at least given him a warning and said don’t draw that picture,’” he told The Sampson Independent. “My son is a very loving son. My son cried for two days because of this. Every day he would say ‘all of my friends are at school and I’m here.’”

“Every other truck you see has a rifle in the back window, but does that [make] them bad people? That’s my point. Guns are not bad. It’s the idiots that have guns and do the damage,” he told The Independent.

The seventh grader has returned to class, but Herring has scheduled a meeting with the school board to appeal the suspension.

He also says his son made the drawings prior to the Parkland High School shooting last February, reports WRAL.

Superintendent Bracy warned parents the incident should teach them to watch what their children do more closely.