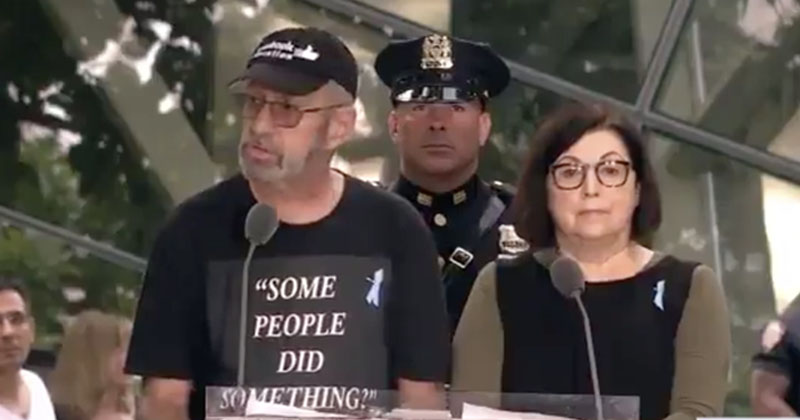 A man whose mother died on 9/11 tore into Rep. Ilhan Omar for describing the terror attacks as “some people did something,” during a memorial service at Ground Zero on Wednesday.

Nicholas Haros Jr. wore a black shirt emblazoned with the phrase “Some People Did Something?” to single out Omar and the Squad while reading out names of the victims, including his mother Frances Haros.

“’Some people did something,’ said a freshman congresswoman from Minnesota,” said Haros about Omar. “Today I am here to respond to you exactly who did what to whom.”

"'Some people did something,' said a freshman congresswoman from Minnesota… Today I am here to respond to you exactly who did what to whom." pic.twitter.com/BWH6zE8CVe

“Madam, objectively speaking, we know who and what was done. There is no uncertainty about that. Why your confusion?” Haros asked. “On that day, 19 Islamic terrorist members of al Qaeda killed over 3,000 people and caused billions of dollars of economic damage. Is that clear?”

“That’s what some people did,” Haros added. “Got that now?”

Omar had made the callous remarks downplaying the 9/11 attacks during a Council on American-Islamic Relations event in March.

“CAIR was founded after 9/11 because they recognized that some people did something, and that all of us were starting to lose access to our civil liberties,” Omar, a Muslim congresswoman, had said.

President Trump tweeted out a video railing Omar for her comments, driving home the point that there was nothing ambiguous about the Islamic attacks on the Twin Towers in 2001 that killed over 3,000 people.

WE WILL NEVER FORGET! pic.twitter.com/VxrGFRFeJM

The lack of criticism from the left of Ilhan Omar and AOC is evidence of the left’s double standards. Paul Joseph Watson joins Alex to discuss how conservatives are being persecuted, yet MSM remains silent.