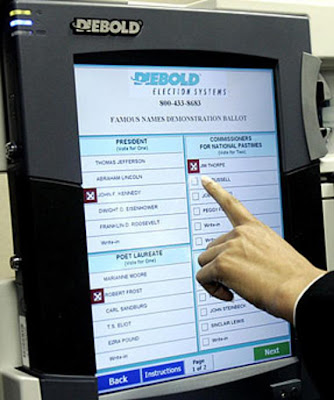 90 per cent of tonight’s votes in the GOP New Hampshire primary will be counted by notoriously suspect Diebold electronic voting machines, which during the Democratic primary back in 2008 produced a result that completely defied both pre-primary and exit polls.

Despite widespread accusations of vote fraud four years ago, New Hampshire has failed to revert to good old fashioned hand-counted paper ballots for all but 10 per cent of the votes that will be cast.

Although 40% of New Hampshire towns use publicly hand-counted paper ballots to arrive at their vote tallies, these only account for 10% of the total votes cast in the state.

“The rest will be cast on hand-marked paper ballots, but tallied by the Diebold optical-scan computers,” reports The Brad Blog. “The same ones shown many times to be easily manipulated and and which sometimes just drop votes in such a way that there is no way to know whether they have been manipulated or failed unless one bothers to actually hand-count the paper ballots. The state does not hand-count those ballots in NH, unless a recount is called for. By then, as we saw in 2008, the chain of custody has been broken and it becomes difficult, if not impossible, to know if the ballots being “recounted” are the ones that were actually cast on Election Night.”

It was thanks to Diebold electronic voting machines, programmed and serviced by a company with a criminal background, that Hillary Clinton was able to pull off the biggest election shock in history by reversing a 13 point deficit to beat Barack Obama by 3 per cent.

At one stage hours before the vote, betting websites were offering odds of 250/1 on a Clinton victory, while Obama was at 1/100. Exit polls of voters on the day of the election confirmed that Obama was cruising to a landslide. And yet Clinton defied all the polls to claim a hugely suspect first place.

“It was noted that Obama was the winner of the hand-counted towns in NH, while Clinton won in the Diebold towns by an almost mirror-opposite percentage,” writes Brad Friedman.

Paul also found himself on the wrong end of suspected vote fraud when election officials in districts such as Sutton reported that Paul had received zero votes, despite numerous individuals immediately going public and asserting they had voted for Paul. Officials later had to admit that 31 votes for Paul in Sutton alone had not been counted due to “human error”.

Although a recount would have cost a mere $2,000, Obama wasn’t interested and Dennis Kucinich ran out of money when the cost suddenly jumped to $60,000, forcing him to abandon his push for a recount despite his partial effort revealing huge discrepancies across the state.

Indeed, the man who lied to the media when he claimed Kucinich was “satisfied” with the 2008 recount, Sec. of State William Gardener, still holds sway in New Hampshire having been in power since 1976.

“Though only Third-World dictators and small town Sheriff’s tend to serve for that long in any one office, the media doesn’t question Secretary Gardner, as he continues to be the state’s point man zealously protecting its billion-dollar industry known as the “First-in-the-Nation” primary,” notes Friedman.

Although Mitt Romney is widely expected to win by a considerable margin, should Ron Paul, who is currently polling in second place, be pushed down to third by establishment candidate and former Obama administration official Jon Huntsman, expect Paul supporters to demand a statistical break-down of Paul’s performance on Diebold machines compared to hand-counted votes.

The results will almost certainly make for interesting reading.

“New Hampshire still uses the same institutionally vulnerable Diebold electronic voting machines as in 2008,” writes Dave Trotter . “So the odds of GOP establishment chicanery are even higher than in Iowa. After all, the establishment that Ron Paul threatens remains firmly in control of the levers and dials of the pollsters and the voting machines.”