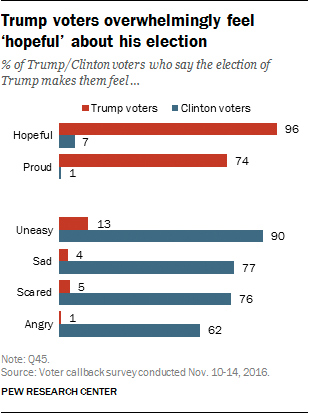 Polls out Monday show many Americans have confidence in Trump’s ability to fulfill his promise to make America great again.

A recent survey from the Pew Research Center says 96 percent (96%) of Trump voters feel hopeful about his electoral victory, with 74 percent (74%) also saying they “feel proud.”

In contrast, 90 percent (90%) of Hillary Clinton voters say they “feel uneasy” about the election’s outcome, with 77 percent (77%) saying they feel sad and 76 percent (76%) claiming they feel scared.

In a surprise twist, 58 percent (58%) of Hillary voters profess they are “willing to give Trump a chance and see how he governs as president.”

Additionally, “An overwhelming 97% of Trump voters expect him to have a successful first term; this is comparable to the 92% of Obama voters who said this about their candidate in 2008,” according to Pew Research.

In other Pew polls, 88 percent (88%) of Trump supporters said they are “fully confident” in a President Trump, and 90 percent (90%) feel fairly confident in his ability to lead in economic, immigration and health care issues.

Trump has also seen a huge upswing in approval ratings, with one poll showing a split of 46 to 46 percent in terms of favorable versus unfavorable ratings, according to a Morning Consult-Politico poll. Compare that to Trump’s unfavorability rating before the election, which at one point sat at 61 percent.