False flag attacks occur when government engages in covert operations designed to deceive the public in such a way that the operations seem as if they are being carried out by other entities.

False flag terrorism is a favorite political tactic used by governments worldwide. They influence elections, guide national and international policy, and are cynically used to formulate propaganda and shape public opinion as nations go to war. 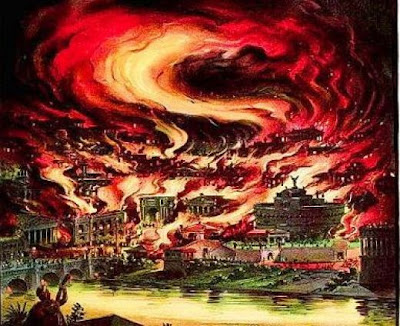 Nero and the Great Fire of Rome

The Roman consul and historian Cassius Dio, his contemporary Suetonius and others say the Emperor Nero was responsible for the Great Fire of Rome in 64 AD.

Legend claims Nero had one-third of the city torched as an excuse to build Domus Aurea, a 300 acre palatial complex that included a towering statue of himself, the Colossus of Nero.

Prior to the fire, the Roman Senate had rejected the emperor’s bid to level a third of the city to make way for a “Neropolis,” an urban renewal project.

The Roman historian Tacitus wrote that when the population of Rome held Nero responsible for the fire, he shifted blame on the Christians for “hating the human race” and starting the fire.

By the late 1800s, the United States was looking for an excuse to kick Spain out of Cuba. U.S. business was heavily invested in sugar, tobacco and iron on the Caribbean island.

The U.S.S. Maine was sent to Havana in January of 1898 to protect these business interests after a local insurrection broke out. Three weeks later, early on the morning of February 15, an explosion destroyed the forward third of the ship anchored in Havana’s harbor, killing more than 270 American sailors.

President McKinley blamed Spain after the U.S. Naval Court of Inquiry declared that a naval mine caused the explosion.

American newspapers blamed the Spanish despite a lack of evidence. “You furnish the pictures and I’ll furnish the war,” newspaper tycoon William Randolph Hearst told Frederic Remington after the illustrator reported that the situation in Cuba did not warrant invasion.

A number of historians and researchers later argued that the ship was blown up by the United States to provide a false flag pretext to invade Cuba and expel Spain.

The United States occupied Cuba from 1898 until 1902, although an amendment to a joint resolution of Congress forbid the U.S. to annex the country.

Wilson’s Pretext for War: The Sinking of the Lusitania

Nearly two thousand travelers, including one hundred Americans, were killed on May 7, 1915, when a German U-boat torpedoed the RMS Lusitania, a luxury Cunard Line British ocean liner. 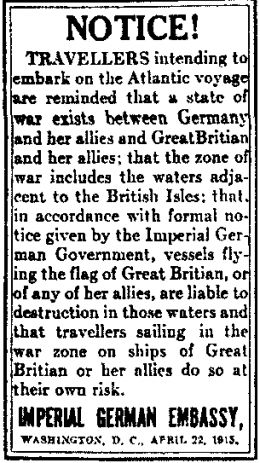 Prior to the sinking, the German embassy in Washington issued a warning. Newspapers in the United States refused to print the warning or acknowledge the German claim that the ship carried munitions.

Wilson’s government issued a flurry of diplomatic protests after the sinking and exploited the tragedy two years later as a pretext for America to enter the First World War.

“There were literally tons and tons of stuff stored in unrefrigerated cargo holds that were dubiously marked cheese, butter and oysters,” Gregg Bemis, an American businessman who owns the rights to the wreck and is funding its exploration, told The Daily Mail.

In February of 1933, a month after convincing Germany’s president that parliament must be eliminated, Hitler and the Nazis instigated the Reichstag fire.

Hitler then urged president Hindenburg to issue an emergency decree restricting personal liberty, including the right to free expression and a free press, limitations on the rights of association and assembly, warrantless searches of homes, property confiscation, and violations of postal, telegraphic and telephonic communications “permissible beyond the legal limits otherwise prescribed.”

The Nazis used the decree and cracked down on their political opponents . They worked behind the scenes to force through the Enabling Act, which legally allowed Hitler to obtain plenary powers and establish a dictatorship.

Gestapo Reichsmarschall Hermann Göring would admit that “the people can always be brought to the bidding of the leaders. That is easy. All you have to do is tell them they are being attacked and denounce the pacifists for lack of patriotism and exposing the country to danger. It works the same way in any country.”

Six years after the Reichstag Fire, the Nazis staged the Gleiwitz incident. Nazi commandos raided a German radio station in Gleiwitz, Upper Silesia, Germany. The raid was part of Operation Himmler, a series of operations undertaken by the SS as Hitler set the stage for the invasion of Poland and the start of the Second World War.

In 1954, the Israelis activated a terrorist cell in response to the United States making friends with the Egyptian government and its pan-Arab leader, Gamal Abdel Nasser. The Israelis were worried Nasser would nationalize the Suez Canal and continue Egypt’s blockade of Israeli shipping through the canal.

Israeli Prime Minister David Ben Gurion decided a false flag terrorist attack on American interests in Egypt would sour the new relationship. He recruited and dispatched a terror cell that pretended to be Egyptian terrorists.

The plan, however, contained a fatal flaw. Israel’s top secret cell, Unit 131, was infiltrated by Egyptian intelligence. After a member of the cell was arrested and interrogated, he revealed the plot and this led to more arrests. Israeli agents were subjected to a public trial revealing details of the plan to firebomb the U.S. Information Agency’s libraries, a British-owned Metro-Goldwyn Mayer theatre, a railway terminal, the central post office, and other targets.

In order to deflect blame, the Israeli government tried to frame its own Defense Minister, Pinhas Lavon, but the true nature of the plot was eventually made public.

In the covert war against the communist regime in Cuba under the CIA’s Operation Mongoose, the U.S. Joint Chiefs of Staff unanimously proposed state-sponsored acts of terrorism in side the United States.

The plan included shooting down hijacked American airplanes, the sinking of U.S. ships, and the shooting of Americans on the streets of Washington, D.C. The outrageous plan even included a staged NASA disaster that would claim the life of astronaut John Glenn.

Reeling under the embarrassing failure of the CIA’s botched Bay of Pigs invasion of Cuba, president Kennedy rejected the plan in March of 1962. A few months later, Kennedy denied the plan’s author, General Lyman Lemnitzer, a second term as the nation’s highest ranking military officer.

In November of 1963, Kennedy was assassinated in Dallas, Texas.

Gulf of Tonkin: Phantom Attack on the U.S, Military On August 4, 1964, President Lyndon Johnson went on national television and told the nation that North Vietnam had attacked U.S. ships.

“Repeated acts of violence against the armed forces of the United States must be met not only with alert defense, but with a positive reply. That reply is being given as I speak tonight,” Johnson declared.

Congress soon passed the Gulf of Tonkin Resolution, which provided Johnson with pre-approved authority to conduct military operations against North Vietnam. By 1969, over 500,000 troops were fighting in Southeast Asia.

Johnson and his Secretary of Defense, Robert McNamara, had bamboozled Congress and the American people. In fact, North Vietnam had not attacked the USS Maddox, as the Pentagon claimed, and the “unequivocal proof” of an “unprovoked” second attack against the U.S. warship was a ruse.

Following the Second World War, the CIA and Britain’s MI6 collaborated through NATO on Operation Gladio, an effort to create a “stay behind army” to fight communism in the event of a Soviet invasion of Western Europe.

Gladio’s “Strategy of Tension” was designed to portray leftist political groups in Europe as terrorists and frighten the populace into voting for authoritarian governments. In order to carry out this goal, Gladio operatives conducted a number of deadly terrorists attacks that were blamed on leftists and Marxists. In August of 1980, Gladio operatives bombed a train station in Bologna, killing 85 people. Initially blamed on the Red Brigades, it was later discovered that fascist elements within the Italian secret police and Licio Gelli, the head of the P2 Masonic Lodge, were responsible for the terror attack. Other fascist groups, including Avanguardia Nazionale and Ordine Nuovo, were mobilized and engaged in terror.

Operation Gladio ultimately claimed the lives of hundreds of people across Europe.

According to Vincenzo Vinciguerra, a Gladio terrorist serving a life-sentence for murdering policemen, the reason for Gladio was simple. It was designed “to force these people, the Italian public, to turn to the state to ask for greater security. This is the political logic that lies behind all the massacres and the bombings which remain unpunished, because the state cannot convict itself or declare itself responsible for what happened.”