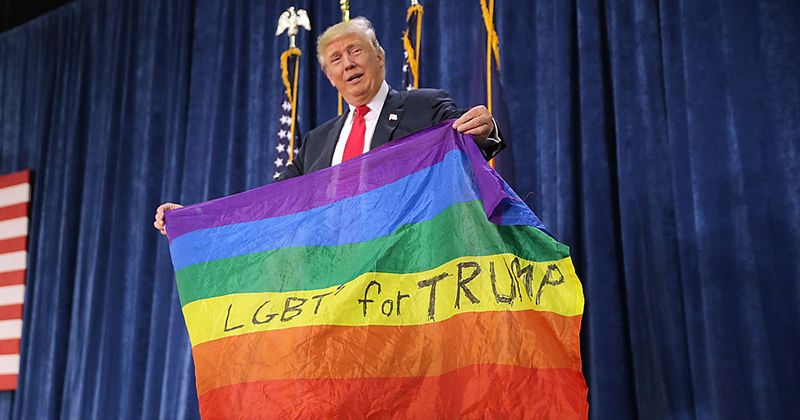 A new campaign ad that has been produced by the Log Cabin Republicans is stirring up a lot of controversy in Washington.  In the nearly four minute ad, Richard Grenell shares a long list of reasons why he believes that Donald Trump is much more pro-gay than Joe Biden.  For those not familiar with Grenell, he served as U.S. Ambassador to Germany from 2018 to 2020, and after that he was appointed as Acting Director of National Intelligence by Trump but he only served a short time in that role.  Right now, he is helping the Republican National Committee reach out to LGBT voters, and that probably explains why he was featured in this video.

At the beginning of the video, Grenell makes this startling claim: “President Trump is the most pro-gay president in American history. I can prove it.”

In order for Grenell to be correct, Trump would have to be more pro-gay than Bill Clinton and Barack Obama.  To make his case, Grenell shares a long list of things that Trump has done to set himself apart including this…

“Donald Trump is the first president in American history to be pro-gay marriage from his first day in office.”

It is true that Bill Clinton never publicly supported gay marriage during his presidency, and Barack Obama only embraced it after already being in the White House for several years.

Trump spoke at the RNC in Charlotte to issue a dire warning that the election is in peril.

But does that truly make Trump the most pro-gay president ever?

I don’t know.  I am just asking the question.

In the ad, Grenell also points out that Trump initiated a campaign to use political pressure to legalize homosexuality all over the world…

“President Trump began a historic campaign to decriminalize homosexuality around the globe at the United Nations, where he publicly challenged the 69 countries who make being gay a crime to change their laws.”

Grenell was instrumental in the implementation of that campaign, and he is very excited about what Trump could potentially achieve during a second term.

Of course the Washington Post is extremely upset about this ad and has called it “absurd”, and other media outlets are using similar language when describing it.

As far as President Trump is concerned, he was so impressed by this ad that he tweeted it out and said that it was a “great honor” to be acknowledged in such a manner.

So obviously Trump fully endorses this video and is thrilled with the claims that are made in it.

Personally, I am not quite sure what to think of this ad, the claims it makes, or Trump’s reaction to it.

So let me ask this question one more time.

Is Donald Trump the most pro-gay president ever?

In so many of my articles, I tell you what I think, but this time I would like to turn the tables.

Not that much surprises me anymore, but I was so surprised by this new campaign ad that I had to write about it.  We have reached such a critical moment in U.S. history, and the choices that we make as a nation from this point forward are of the utmost importance.