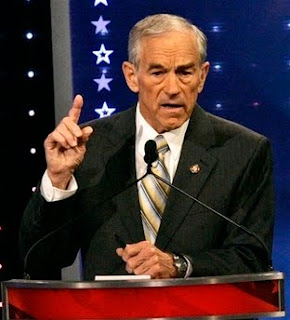 Call it the Ron Paul Revolution

While no personality should be followed, rather the ideals they represent, the necessity to reclaim the Tea Party is apparent. By naming it the “Ron Paul Revolution” it will become virtually impossible to commandeer without conceding to the ideals of Constitutionalism, minimal government, non-interventionism, and ending the Federal Reserve. Impossible indeed would it be to slip in the disingenuous continuation of the doomed ever-convergent left/right agenda.

By battling for the leadership of the Tea Party, now thoroughly infested by Neo-Conservatives and feckless career Republicans, we are needlessly expending our energy. The very name “Tea Party” invites ambiguity amongst which vile infiltrators can peddle agendas nothing at all related to restoring and upholding the US Constitution. In fact, it has allowed the Ron Paul Revolution, from which the Tea Party was spawned, to be pushed back toward the controlled left/right paradigm.

Ron Paul has dedicated his life to his nation, a dedication one needs only to examine archival videos to observe and note its consistency over more than two decades. That is something none of the impostors infiltrating the Tea Party now can claim, including the disingenuous Glenn Beck and his feckless intellectually compromised counterpart Sarah Palin. These are the same talking heads that have been misleading the country all along, repackaged and resold under the brand “Tea Party.”

In the 2008 election, despite Ron Paul not being on the ballot, I sent in my vote all the way from Thailand with his name written in. It was not so much a vote for Ron Paul himself, as he was no longer in the race, but rather the ideals he represents. There is no sense at all voting between establishment controlled, career liars like Barack Obama or John McCain. Their servile obedience and dependency on the corporations that fund their campaigns and write their talking points within the halls of the globalist think-tanks ensures unequivocally their betrayal of their campaign promises, their betrayal of the American people, and perhaps most egregious of all, their betrayal of the US Constitution. There is no lesser of two evils, and to vote for either one is as fruitful as not voting at all.

Ultimately, the corporate-financier oligarchs will destroy “their” America entirely before conceding to a fair and free election where someone beyond their sponsorship is given the reins of power. This is why it is important for us to systematically boycott and replace the current system and build a network of local, viable alternatives a real president can preside over – a president who truly represents the will of the people and above all is obedient to the US Constitution. This can only be done through financial and economic independence from the Fortune 500.

Come hell or high water, when the 2012 election comes, Ron Paul’s name is going on the ballot again whether he is in the race or not. Certainly the feckless stooges vying now for the Republican candidacy to face off against the treasonous Barack Obama gives us another false and ultimately self-defeating choice. I am not part of the Tea Party, I am a part of the Ron Paul Revolution.