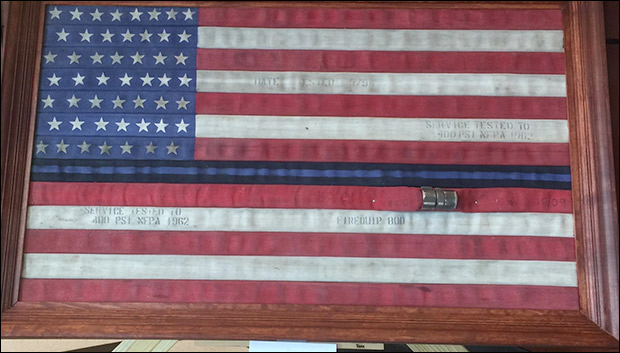 A sheriff in Virginia is angered after being ordered to remove an American flag display from his local courthouse, in a move he is labeling “a slap in the face.”

The Portsmouth Fire Department recently gifted Sheriff Bill Watson’s office with a flag display crafted out of recycled fire hoses, complete with a sign that reads, “A Tribute to Public Safety.”

When Sheriff Watson attempted to have the display mounted in the lobby of the Portsmouth courthouse, however, judges blocked the effort claiming it would set the wrong precedent.

Sheriff Watson says the judges told him “Not only do we not want it on the wall, we don’t want it in the courthouse.”

“I just can’t believe that they don’t want to display the American flag in a courthouse, I mean that’s the most asinine thing I’ve ever heard in my life,” Sheriff Watson lamented to CBS affiliate NewsChannel3.

One of the judges, who preferred to remain anonymous, explained their position to reporters, saying the lobby was an inappropriate location for the display and was unnecessary.

Additionally, the judge said they feared a slippery slope would ensue that would cause them to allow all types of displays.

Sheriff Watson says that explanation is unacceptable, especially in light of the fact that the flag is an obvious tribute to public safety officers like he and his deputies, who are expected to protect the judges with their own lives if necessary.

“They expect my deputies to put their life on the line for a judge. If somebody was going to come into a courtroom with a gun, the deputy is supposed to stand in front of the judge and take a bullet, but yet they won’t let us have our flag, saluting public safety? To me, that’s a slap in the face,” Sheriff Watson told WTKR.

The group of judges attempted to console the incensed sheriff by granting him permission to post the flag in his personal office, which is situated on the first floor beside the lobby.

The Sheriff countered saying he would prominently display Old Glory on his office’s window, asserting he would be willing to be incarcerated over the flag dispute.

In a related story, another flag controversy erupted last week at the University of California Irvine.

After a student leadership panel voted to ban all flags from their campus lobby, school officials claim they received a “viable threat of violence” forcing them to cancel a student government meeting. No details regarding the alleged threat were disclosed.