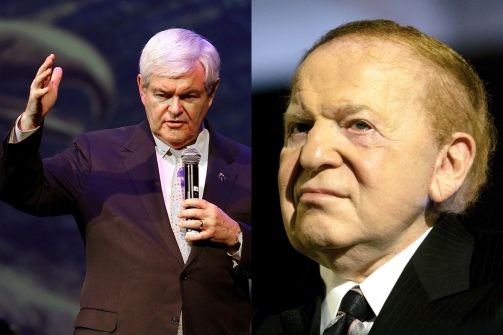 “Adelson uses his money to abuse or anoint Israeli prime ministers and American presidents (Gingrich versus Obama).”
Source – “Is Gingrich’s Hard Line on Palestine Paid for by Sheldon Adelson?”

Ron Paul, a popular Southern conservative who supports states’ rights, supposedly came in fourth place in the South Carolina Republican primary on Saturday, January 21.  The winner, according to the tally produced by the privately-owned voting machine company ES&S, was Newt Gingrich.  Gingrich is supported by Sheldon Adelson, the Zionist casino billionaire who supports the most extreme hard-liners in the right-wing Likud in Israel.  The Gingrich campaign received a $5 million donation from Sheldon Adelson the week before he “won” the South Carolina primary.  Gingrich calls the indigenous Palestinian population an “invented” people and supports Israel’s right to attack Iran as “self defense”.  Gingrich told CNN he would help Israel attack Iran and would move the U.S. embassy to Jerusalem on his first day in office by executive order.  These are the hard-line positions Adelson is paying Gingrich to espouse. 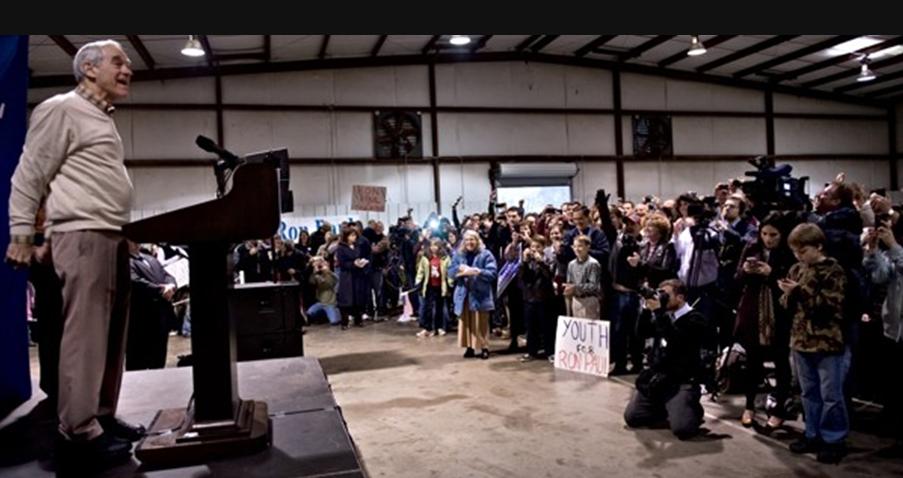 Mitt Romney is supported by the Crown family of Chicago, a Zionist family that is closely connected to Israeli military intelligence.  Newt Gingrich, on the other hand, is supported by Sheldon Adelson, a Zionist billionaire who works closely with the same people.  Are these different factions or is this a Zionist plot that has the same goal?

The Zionist strategy is to stop the very popular conservative Ron Paul.  Because there is obviously no candidate that can beat Paul in popularity or on the issues, the Zionists are supporting a slew of venal candidates in order to steal as many votes as possible from Paul.  These candidates are essentially a gang of Zionist-funded candidates who form the anti-Paul coalition.  Using privately-owned and controlled electronic voting systems like ES&S, the South Carolina primary shows how the Zionists plan to block Ron Paul from being the Republican nominee …

From this event, one can state as fact – not theory, that Israel and its supporters in the US are actively working to derail Ron Paul’s race towards the GOP nomination, and the Presidency. This fact alone, should be cause for alarm from even the most moderate of public corridors.  Should a foreign country, in this case Israel, be allowed to buy a significant influence through the media in American democratic elections?  Should candidates be allowed to accept donations – even indirectly, from foreign interest PACs or agents thereof, thus creating a serious conflict of interest, and threat to national security?
– “Israeli Lobby launch new Super PAC effort to bring down Ron Paul” , by Patrick Henningsen, Global Research, 21 January 2012

WHO STOLE THE IOWA CAUCUS?

After two weeks, the Republican Party of Iowa released its certified tally of the January 3 caucus.  The certified final tally released on January 18 indicates that Mitt Romney did not win the Iowa caucus and that the results had been manipulated to give Romney the important first victory.  The scale of the fraud in the Iowa caucus is so large that it suggests that there was a hidden hand manipulating the data from across the state as it was sent to party headquarters to give the victory to Romney.  This suggests that the people behind Romney are likely to be the people behind the vote fraud, i.e. Lester Crown, Israeli intelligence, and the Zionist Fifth Column in the United States.

I spoke to Ryan Gough, the 24-year-old Organization Director for the Republican Party of Iowa on January 20.  I asked him how there could be so many mistakes in so many precincts.  The Des Moines Register, for example, reported that “typographical errors in tabulations” for two Fayette County precincts resulted in an inflated vote for Romney, who was initially reported to have carried the county by 67 votes. The final count showed Santorum carrying the county by 36 votes.  Romney was reported to have won the caucus by only 8 votes on January 3.  This was false.

There were similar problems in 131 precincts with double-digit errors in 51 precincts.  In spite of the wrong candidate having been declared the winner, Gough defended the caucus, which he called a “volunteer-driven process” in which typographical errors had occurred across the state to benefit Mitt Romney.  I don’t buy it.

I reminded Gough that we had spoken a week before the primary and that he had told me that the way in which that precincts would communicate the results to caucus headquarters in Des Moines was being kept secret for security purposes.  Now that the caucus was over, I asked, could he tell me how this was done.  Gough said that a phone and computer system had been used but he had not gone into detail.  When I asked if the telephonic system had been voice-to-voice, he said it was.

I then asked Gough if any outside agency had been involved in the tally of the results on January 3.  He asked me what I meant and I told him that the Democratic Party of Iowa had used a telephonic tally system based in Florida called Voxeo in 2004 and 2008.  I had been told by Nicole Sizemore of the GOP of Iowa that no outside agency would be involved in the tally, I told Gough.

Yes, Gough said, there was an outside “telecom” involved in the tally, although he said he could not reveal the name of the company.  This “telecom” is the most likely culprit behind the fraudulent tally in the Iowa caucus.  I am seeking information from people who were involved in the caucus to find the identity of this mysterious “telecom” that gave Romney the first, but fraudulent victory on January 3.  As the rest of the primaries will use even less verifiable electronic voting machine systems, solving what happened in the Iowa caucus is important because it could expose the criminals who steal our elections.

THE IOWA CAUCUS WAS STOLEN – ROMNEY DID NOT WIN

GOP officials discovered double-digit errors in 51 of those certified precincts when they compared what was reported on caucus night with the official Form E documents signed by precinct volunteers. Eleven precincts had errors of 50 or more votes.
– Des Moines Register, 19 January 2012

“The one thing that we can’t say is, we can’t certify every precinct in the state.”
– Iowa GOP Chairman Matt Strawn, 19 January 2012

When I began writing this article, just after Christmas, I was simply going to predict that Mitt Romney would win the Iowa primary by vote fraud, just like Obama and John Kerry had won the Democratic state polls of 2008 and 2004.  My dire and pessimistic prediction was based solely on the fact that Romney was being supported by the high-level Zionist family of Lester Crown of Chicago.  These are people who steal elections, I thought, and they will find a way for Romney to win the crucial first caucus – one way or another.

I repeatedly queried three different people at the Republican Party of Iowa about how the results would be tallied and after hearing that they would not use an outside contractor to count the votes, decided to qualify my dismal prediction by giving them the benefit of the doubt.  I didn’t want to be a bearer of bad news so I wrote this (in the article below):

Today, two weeks and three days after Romney was declared the winner in Iowa, the certified final tally from the Republican Party of Iowa shows that he did NOT win the caucus at all.  The caucus process and tally were completely messed up and, according to the final, but still seriously flawed results, Rick Santorum reportedly won the caucus.  There is now very clear evidence of serious vote fraud in the Iowa caucus.  This cannot be simply dismissed as human error.  This was criminal vote fraud that cheated the entire nation.  The people involved in this case of egregious vote fraud must be investigated and prosecuted.

VOTE FRAUD IN AT LEAST 131 PRECINCTS

Here are the key extracts from the Washington Post article of 19 January 2012:

Rick Santorum won the Iowa caucuses Thursday — 16 days after the last vote was cast — when the state Republican Party said a final count showed him 34 votes ahead of Mitt Romney.

Santorum’s strange, belated victory also served to embarrass the Iowa GOP — which had to admit that it had misallocated some votes, and simply lost some others, in a razor’s-edge election where every vote mattered.

It also cast an unflattering light on the old-fashioned and convoluted system that the party uses to collect and count caucus votes.

“It should be like a fine Swiss watch,” said Iowa State political science professor Steffen Schmidt. “It’s really more like a sundial.” He said the system used by Iowa Democrats was not significantly better.

In fact, Iowa Republican leaders seemed to cast doubt on their own results, saying Thursday that it was hard to declare a “winner” without knowing what happened in those eight precincts.

Thursday’s final count came from these forms, which had to be submitted by Wednesday evening. The Des Moines Register, citing unidentified officials in the Iowa GOP, reported that in 131 precincts, the forms showed numbers different than those reported on caucus night.

But some Form E’s didn’t show up at all.

The state party found that it was missing results from eight precincts, spread across five counties.