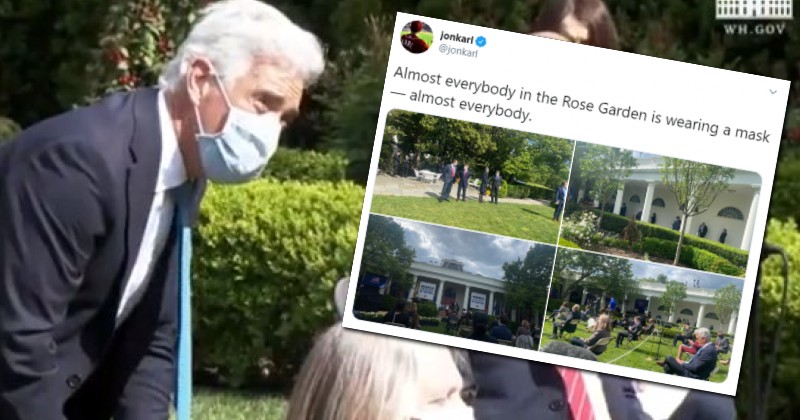 ABC’s Chief News Correspondent Jonathan Karl tried to ‘mask shame’ Fox News’ John Roberts, only for someone to point out to Karl that he didn’t wear a mask when he was out in public last week.

However, Roberts was in fact in possession of a mask and had only briefly removed it.

Jon Karl trying to throw some shade at John Roberts of FOX News for not wearing a mask — but it was off just for a moment. These people are so petty — while pretending to be heroes. https://t.co/a8e8hO00Rb pic.twitter.com/hRiXgDPlOs

But that wasn’t the most embarrassing comeback aimed at Karl. Turns out he’s been in an even more public area while failing to wear a mask.

“You didn’t wear a mask on Cinco de Mayo to pick up your tacos from Mi Vida. Why not?” asked Luke Mahoney.

You didn't wear a mask on Cinco de Mayo to pick up your tacos from Mi Vida. Why not? Is there a different standard for the media? Are there some places we have to wear masks and others we don't? pic.twitter.com/nA8L69TsEj

“Is there a different standard for the media? Are there some places we have to wear masks and others we don’t?”

This is more proof that mask wearers are wearing the face coverings as a status symbol to signal their own virtue, allowing them to judge people who choose not to wear masks, while their own behavior proves them to be total hypocrites who don’t actually care about spreading the virus.

Meanwhile, another reporter wearing a mask removed it while asking President Trump a question, defeating the whole purpose of wearing the mask.

Who’s this person who doesn’t understand what masks are for?

She just wearing it to virtue signal?

You don’t take it off to shout your germs across everyone, genius. 🤦🏻‍♂️ pic.twitter.com/Nr5jWSWWlS