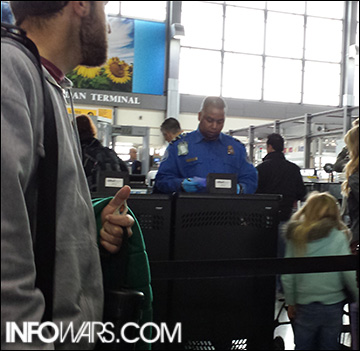 A former Transportation Security Administration agent offered a confession of sorts in Politico Magazine on Thursday, called “Dear America, I Saw You Naked.”

“In private, most TSA officers I talked to told me they felt the agency’s day-to-day operations represented an abuse of public trust and funds,” Jason Edward Harrington writes, before detailing how TSA screeners routinely made jokes about passenger appearances, and even set up a system of code words such as “Alfalfa” to warn others when attractive female passengers were passing through $150,000 full-body scanners they all knew wouldn’t stop a determined terrorist.

After reading his account, and others in his blog, Taking Sense Away, I came to one inescapable conclusion:

We have outsourced airline security to a bunch of teenagers.

It’s time to pull the plug and bring the adults back into control.

Also, before I forget: This abusive, intrusive, wasteful bureaucratic monstrosity is the product of a Republican Congress and a Republican president.

One of the most important qualities of true leaders is the ability to admit mistakes and take steps to fix them. Here’s a great chance for the Republicans to show — in an election year, no less — why they’re different from President Obama and the Democrats, who have doubled down on the Obamacare disaster, and why they deserve control in Washington.