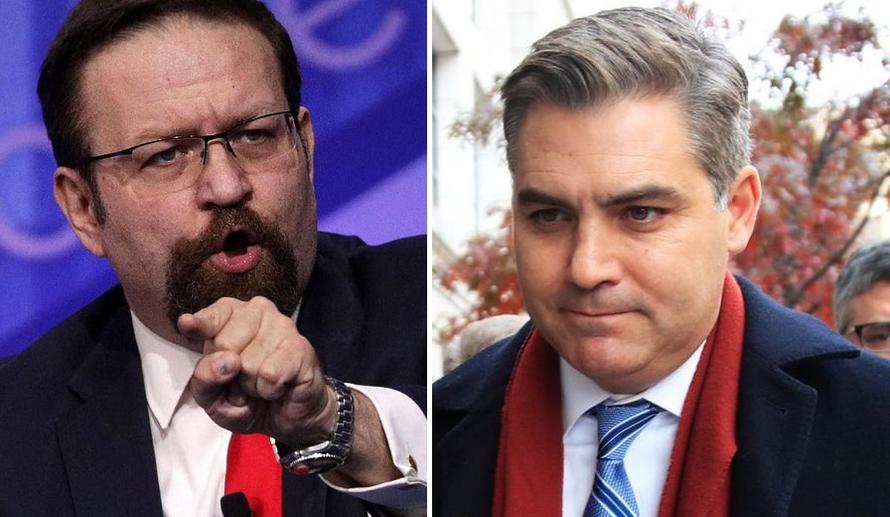 According to multiple witnesses, Acosta made a flippant remark to Gorka – who just launched his SALEM Radio Network show “America First,” telling him that media-related meetings with the president were for “real journalists” only.

Acosta walked in then, according to Gorka, touched his arm and said “Why are you here? This place is for journalists only,” then walked away. He also noted that the incident occurred in front of fellow SALEM host Mike Gallagher and Sirius Patriot XM host David Webb — and explained that, although they had been in the same building on several occasions, he and Acosta had never officially met prior to this incident.

Alex Jones and Roger Stone issue a dire warning to President Trump about the future of his first term.

“Abilio ‘Jim’ Acosta, you are a dickhead,” Gorka fired back at Acosta. –Daily Caller

“For the next 40 minutes, he hid in the back and didn’t come out as I was right by the exit, until I went to the Oval Office,” Gorka told the Caller, adding “Jim Acosta is actually worse than anyone imagined. He’s definitely not a journalist, and he is clearly a cowering coward. I just feel sorry for anyone who is in the White House pool with him and know he is hated by all the actual journalists in the White House.”

Wow! Unbelievably NASTY decorum in White House Press Briefing room! @Acosta walks by new radio show host @SebGorka and says to him: “Why are you here? This place is for journalists only.” Really Jim? And #FakeNewsers too? Welcome to the press room, Seb!

Vince Coglianese of the Daily Caller was there for the exchange, and said “The whole room went silent as Gorka chewed [Acosta] out.”

Sirius Patriot XM host David Webb confirmed the incident, saying “I was right next to Sebastian and he reported accurately what Acosta said. Acosta was serious and condescending.”

Alas, no audio of the incident has emerged, but you can listen to Gorka’s account below: