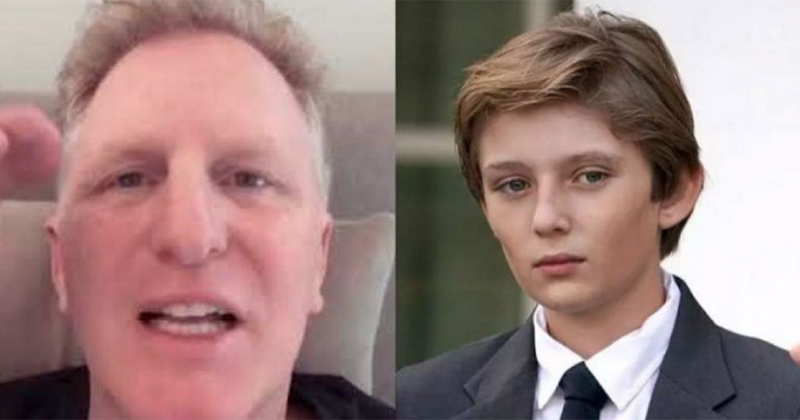 Earlier this week, we reported that actor Michael Rapaport had blasted First Lady Melania Trump as a “dumb animal.”

Now, he is going after her 13-year-old son Barron Trump, calling for the young boy to be exposed to coronavirus.

Rapaport posted a video to social media on Wednesday night in which he told President Donald Trump to encourage his children, including Barron, to break quarantine and expose themselves to coronavirus by leaving their homes.

The profanity-laced video was posted in response to Trump saying that the media wants him to keep the country shut down as long as possible to lower his chances of being reelected.

Rapaport then demanded that Trump force his own children out of isolation before the rest of the nation so that they would be exposed to coronavirus.

“Why don’t you send your f***ing son, dick stain Donald Trump Jr., big-toothed Eric Trump, little f***ing Barron, f***ing Ivanka, junkyard Jared… let them go out there and test the f***ing waters,” he said. “Let them see if sh*t is sweet. Let them take the cars, the trains, the buses, the Amtrak, let them play in the park. And if everything’s good after five days of them playing in the streets, we’ll all go back to [work].”

Rapaport ended his deranged rant by talking about the “shame” Americans will feel if they reelect Trump. “You want to make the American people guinea pigs, so you can get re-elected? You f***ing clown,” he said. “And people if you fall for this sh*t, shame on you… This guy doesn’t give a f*** about anyone but himself.”

The only “shame” I feel right now stems from living in the same country as this lunatic actor! When Barack Obama was in office, his daughters Malia and Sasha were considered to be “off limits” to attacks, and anyone who dared to disparage them in any way was immediately publicly shamed. Since Rapaport went after Trump’s children, however, he has suffered virtually no repercussions whatsoever.

Rapaport can attack Trump as much as he wants —the president can handle it— but going after his children crosses the line. Rapaport owes the entire Trump family an apology, but given how he is clearly infected with Trump Derangement Syndrome, we doubt he will be giving them one anytime soon.