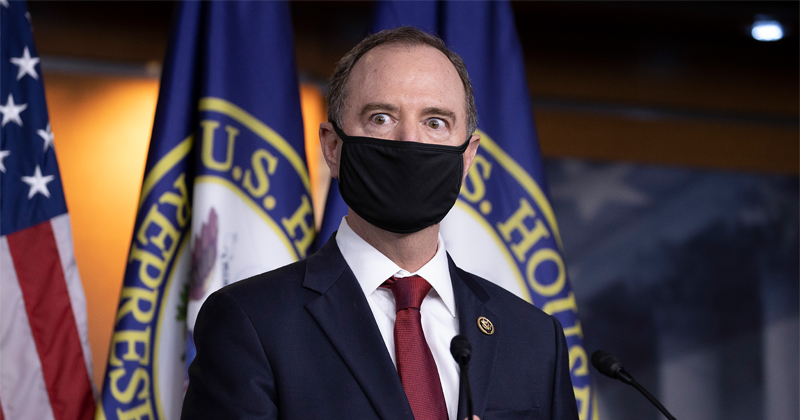 Rep. Adam Schiff (D-CA) was briefed on unverified intelligence that Russia was offering the Taliban to kill US soldiers in Afghanistan – yet did nothing with that information, according to The Federalist.

Schiff, who chairs the House Intelligence Committee, was a key player in the attempt to remove Trump from office – first claiming he had evidence of collusion with Russia, before pivoting to the Ukraine saga where he spearheaded the House’s impeachment of Trump over his request that Ukraine’s new president investigate Joe and Hunter Biden over allegations of corruption.

And yet, somehow Schiff failed to weaponize the ‘Taliban bounty’ story for months after his staff was briefed on the rumor during a February congressional delegation (CODEL) trip to Afghanistan.

The Federalist points out Schiff’s hypocrisy:

Schiff’s recent complaints that Trump took no action against Russia in response to rumors of Russian bounties are curious given that Schiff himself took no action after his top staff were briefed by intelligence officials.

As chairman of the intelligence committee, Schiff had the authority to immediately brief the full committee and convene hearings on the matter. Schiff, however, did nothing. He did not brief his committee on the matter, nor did he brief the gang of 8, which consists of top congressional leadership in both chambers.

Schiff is demanding that the Trump administration brief all of Congress about the unverified allegations, yet he himself did not ask for a briefing of the Intelligence Committee following the February briefing of his own staff.

Schiff spokesman Patrick Boland failed to respond to a Federalist request for comment on the congressman’s inaction for months, or why travel records from the Afghanistan trip had yet to be disclosed in the Congressional record “as required by law.”

Meanwhile, Director of National Intelligence John Ratcliffe said in a Saturday statement that he had “confirmed that neither the President nor the Vice President were ever briefed on any intelligence alleged by the New York Times in its reporting.”

And in a Saturday night Tweet in response to establishment tool Lindsey Graham (R-SC), Trump wrote “Intel just reported to me that they did not find this info credible, and therefore did not report it to me or VP.”

Intel just reported to me that they did not find this info credible, and therefore did not report it to me or @VP. Possibly another fabricated Russia Hoax, maybe by the Fake News @nytimesbooks, wanting to make Republicans look bad!!! https://t.co/cowOmP7T1S


So why is the New York Times continuing to promote this unverified intelligence – going so far as to exploit the dead – when even Adam Schiff wouldn’t touch it?