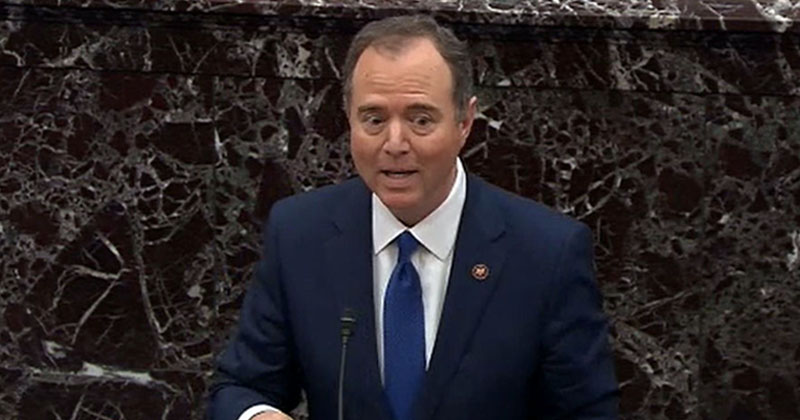 House Intelligence Committee Chairman Adam Schiff brazenly lied to the Senate body during the ongoing impeachment trial of President Trump by denying he knew the identity of the so-called “whistleblower” who sparked the Democrats’ latest impeachment push.

Schiff denied having any contact with the “whistleblower” when answering a question from Ted Cruz about whether that whistleblower worked “with Biden on anything related to Burisma or the firing of the Ukrainian prosecutor.”

“First of all, I don’t know who the whistleblower is,” Schiff said. “I haven’t met them or communicated with them in any way.”

Adam Schiff just lied on the floor of the United States Senate during an impeachment trial. Talk about abuse of power! pic.twitter.com/NG2myMxKWy

This is categorically false.

In September, reports emerged that the whistleblower had reached out to Schiff’s office before he ever filed a complaint against Trump to seek guidance on how to do so.

The Democratic head of the House Intelligence Committee, Representative Adam B. Schiff of California, learned about the outlines of a C.I.A. officer’s concerns that President Trump had abused his power days before the officer filed a whistle-blower complaint, according to a spokesman and current and former American officials.

The C.I.A. officer approached a House Intelligence Committee aide with his concerns about Mr. Trump only after he had had a colleague first convey them to the C.I.A.’s top lawyer. Concerned about how that initial avenue for airing his allegations through the C.I.A. was unfolding, the officer then approached the House aide. In both cases, the original accusation was vague.

The White House even pointed out on Twitter how Schiff earned “4 Pinocchios” by the Washington Post for repeatedly lying on cable news about his relationship with the whistleblower.

WAPO: This is flat-out false. Unlike the quick two-step dance he performed with Anderson Cooper, Schiff simply says the committee had not spoken to the whistleblower. Now we know that’s not true.
https://t.co/khPKzzGNl0

Additionally, Schiff even fabricated the content of Trump’s call with Ukrainian President Zelensky AGAIN, but this time on the Senate floor.

He is so desperate to remove America's duly elected president that he would say & do anything to make his point.

Will Schiff – the Democrats’ lead impeachment manager – face consequences for point-blank lying to the entire Senate during a historic impeachment trial of a sitting president?

Millie Weaver recently reported that, according to sources, the supposed whistleblower that triggered the impeachment inquiry into motion is really nothing more than cover for ‘warranted’ electronic surveillance monitoring the Trump Administration’s investigations into corruption tied to Ukraine.