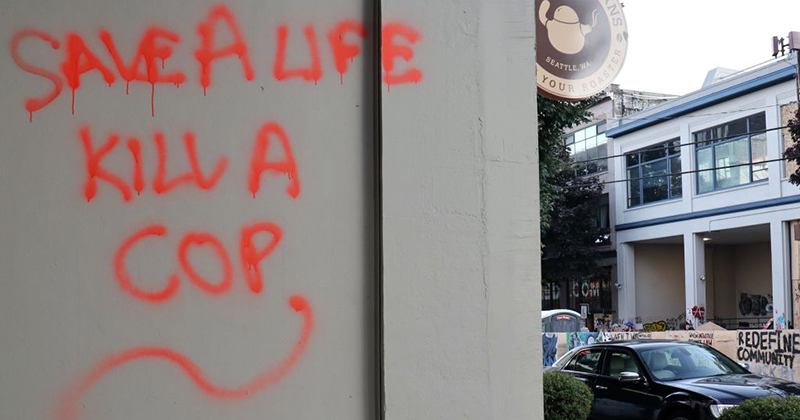 A reportedly African American man was killed in a shooting in Seattle’s Capitol Hill Autonomous Zone, with shots recorded at around 2.20 a.m. last night.

A shooting took place earlier this morning as police have entered the “no-cop” zone to launch an investigation into the infamous anarchist commune which sprouted out of the abandonment of a local police precinct during the George Floyd riots in a move intended to quell tensions.

Spent shell casings and police suited up in riot gear were also reported at the autonomous zone’s border, according to The New York Post.

Citizens of CHOP made time to talk about Jesus with visiting street preachers and finished off with a group prayer.

Police say they faced hostile crowds, while firefighters were allowed through a large crowd which had formed to take the victims to safety.

Seattle police say “Officers attempted to locate a shooting victim but were met by a violent crowd that prevented officers safe access to the victims. Officers were later informed that the victims, both males, had been transported to Harborview Medical Center by CHOP medics.”

One victim succumbed to his wounds, while another remains in critical condition at Harborview Medical Center’s intensive care unit.

A local report finds that the fatality was a 19-year-old man who died at the scene, while a second shooting took place shortly afterwards, leaving the other victim with life-threatening injuries.

#CHAZ / #CHOP – This is the scene of the murder this morning in CHOP. A 30 year old African American man was shot and died on the scene. There was also a second shooting 20 minutes later one block away. pic.twitter.com/hf1FSPFhuH

The New York Post reports that local security reportedly saw a shooter appear in a black SUV in the early hours of Saturday morning, although the suspects fled and no viable description has been handed to the authorities.

The CHAZ Updates Twitter account also caught wind of the situation, with commenters mocking the zone’s representation by local authorities as “peaceful,” despite the forcible ejection of problematic types and accusations of their local warlord’s gun running.

Currently hearing about a shooting death in the CHAZ

Since the police-free zone emerged, Seattle Police Chief Carmen Best reported that 911 calls for rape and violent crime had more than tripled in the few days after the establishment of CHAZ.

Seattle Mayor Jenny Durkan came out in defense of CHAZ, calling the six-block autonomous zone as “peaceful.” Mayor Durkan also slammed Trump’s threats of military action to clear out the zone to restore order as “unconstitutional” and “illegal.”

A similar autonomous zone in Portland was cleared out after protesters attempted to expand the zone’s borders to encompass the mayor’s condo.