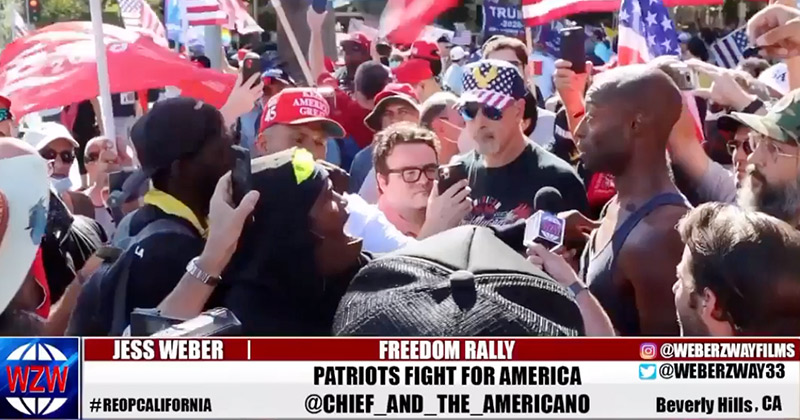 Video from a Freedom Rally in Beverly Hills, California shows a pair of young black men approach the group and begin bragging about “looting” before an African Trump supporter arrives and verbally schools them.

As the two young men started to create a scene in the pro-Trump crowd, a black Trump supporter approached them and said, “I’m African, I know my heritage.”

One of the men replied, “You go to Africa with that shirt on,” pointing at a Trump t-shirt and insinuating he wouldn’t be welcome.

“I did two years ago to shoot a movie,” the Trump supporter quickly responded.

The uneducated young men continued arguing and claimed Africa was named after a white man while criticizing the Trump supporter.

Frustrated and trying to understand what point the men were trying to make, the Trump supporter asked, “What are you trying to do here?”

“I hate all these f*cking racists,” one of the young men answered, pointing at the Trump crowd.

People in the crowd shouted, “We don’t hate you” and “We hate racists too.”

When asked why they’re protesting the death of a criminal at the hands of police, but won’t protest the babies who are constantly killed in Chicago, one of the men dismissed the question, saying, “People die all the time.”

When faced with the reality of black Americans killing each other en masse, the pair of aggressive BLM supporters finally walked away.

Before exiting, one of the guys threatened, “You ain’t seen nothing yet,” when asked about the riots and looting seen over the past few months.

After the two men left, the African Trump supporter continued showing demonstrators and media photos and names of all the black children recently killed in Chicago.