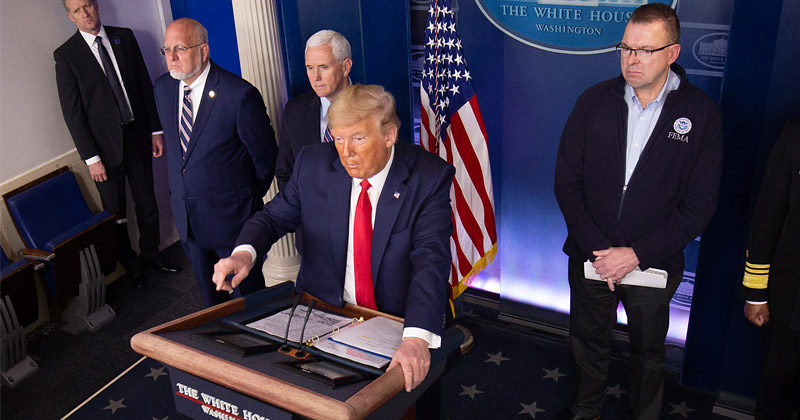 President Trump wants to reassess ‘shelter-in-place’ restrictions after the end of his mandated 15-day period, stating that “we cannot let the cure be worse than the problem itself.”

The president has already considered reopening the country after the 15-day waiting period he put in place to try to slow down the spread of coronavirus, according to media reports.

“The president started talking about how to get people back to work around Thursday, two of the people said, only three days after he helped roll out a 15-day plan from the Centers for Disease Control and Prevention to stem the rise of cases by encouraging most people to stay at home. That campaign would end about March 31,” reported Newsmax. “The discussions centered on what to do after the 15-day period ends, and how to test and isolate everyone who’s sick so healthy people can return to work. It’s likely the CDC guidelines would be relaxed rather than scrapped altogether, one person said.”

The president is now facing a dilemma in which further lockdowns in response to the coronavirus would lead to a recession as bad  as – if not worse than –  the 2008 Great Recession, especially given how many Americans are heavily in consumer debt and are thus living paycheck-to-paycheck.

According to libertarian commentator Kristin Tate:

Financial planners suggest saving at least 20 percent of take home income, while spending at most 30 percent on discretionary items. Yet too many workers still fail to think twice about spending entire paychecks for things they want but do not need.

It’s a brewing economic crisis that President Trump has already publicly lamented on, and his response to a tweet by constitutional lawyer Robert Barnes reveals the president is getting more hesitant about lockdowns, martial law and other escalating government responses to the coronavirus which would derail the economy for years.

WE CANNOT LET THE CURE BE WORSE THAN THE PROBLEM ITSELF. AT THE END OF THE 15 DAY PERIOD, WE WILL MAKE A DECISION AS TO WHICH WAY WE WANT TO GO!

Robert, we will end up stronger than ever before. Thank you! https://t.co/4UfMaCmkg5