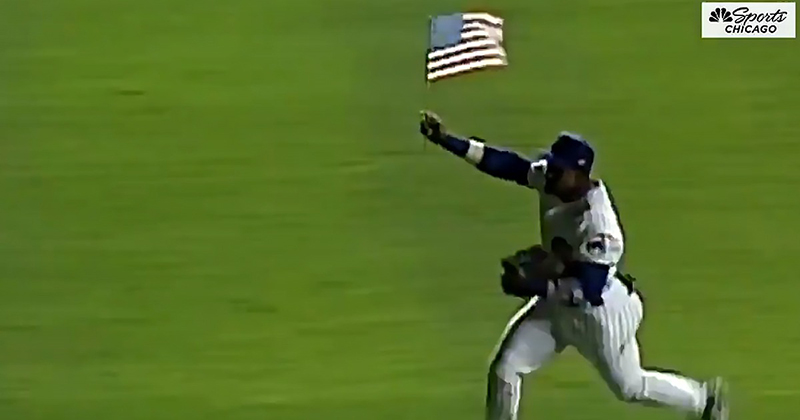 In less than 20 years, American sports events have transformed from patriotic expressions of love for the United States to sports-themed social justice seminars that now play the fictitious “Black National Anthem” and feature Black Lives Matter propaganda while some players refuse to enter the field until the actual National Anthem plays.

In the days immediately following the terrorist attacks on 9/11, the Chicago Cubs’ Sammy Sosa hit a home run during the team’s first home game after the tragedy. Sosa began running the bases, only to have coach Billy Williams intercept him with an American flag. Sosa grabbed the flag, and waved it proudly as he ran the bases.

“Sosa hits it in the basket, and he’s got old glory too,” screamed the announcer. “And how about that hand off from Billy Williams, and he carries Old Glory on the grand tour for home run number 59!”

Owen comments on the NFL opening and how the fans reacted.

20 years later, as the NFL started its season, an entire team left the fielduntil after the National Anthem and Black National Anthem played. This is despite a teenage musical duo singing the anthems while wearing shirts honoring deceased drug enthusiast and suspected fraudster George Floyd.

Meanwhile, The Chiefs stood arm-in-arm throughout both the actual National Anthem and the Black National Anthem, a militant song that instructs the black race to keep fighting until victory is attained.

Fans who disliked the display and expressed their distaste by booing were then mocked by Democrats and those on the political left for daring to express their expectation for a sporting event to focus on athleticism and perhaps include a small amount of patriotism.

The NBA, meanwhile, returned to the stadiums after COVID-19 only to be greeted by virtual fans and Black Lives Matter propaganda emblazoned onto the basketball courts themselves.

“A big ‘Black Lives Matter’ slogan was also painted on the court, in an effort to show the NBA’s solidarity with the BLM movement,” reported National File. “Despite their radical aims.”

The NBA is officially back! pic.twitter.com/4FYYSQB5Jm

Meanwhile, Major League Baseball viewership is plummeting as the sports organization’s 2020 season has featured a series of activist stunts. In game, the New York Mets and Miami Marlins players met in the middle of the field, observed a moment of silence for Black Lives Matter, then walked off the field together, leaving a Black Lives Matter shirt behind.

Ironically, the Mets also hold a historic place in post-9/11 history. They were the first sports team to play a game in New York following the terrorist attacks on 9/11.