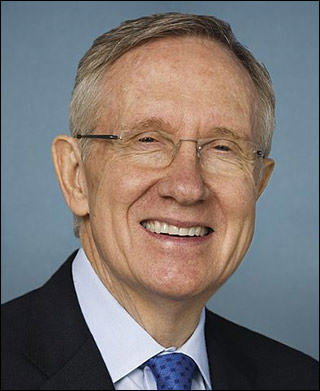 In the wake of the now-infamous federal abuse unleashed on the Bundy ranching family and its supporters in Nevada, defenders of the heavy-handed terror tactics employed by the Obama administration’s Bureau of Land Management are finding themselves increasingly marginalized as potentially violent extremists. That is especially true for U.S. Sen. Harry Reid (shown, D-Nev.), who after launching a series of bizarre tirades against the ranchers and their friends, is being widely criticized and ridiculed — especially for his dangerous attempt to equate American citizens who protest government with “domestic terrorists.”

As The New American and much of the national media have been reporting for weeks, the Obama administration, led by a former Reid staffer who took over the BLM, descended on the Bundy ranch with heavily armed agents. Making matters worse, officials even tried to corral protesters into an unconstitutional “Free Speech zone,” sparking nationwide outrage. The David vs. Goliath-style violence and abuse by the feds, much of it videotaped and posted online, shocked the conscience of ordinary Americans.

Incredibly, amid the operation to remove so-called “trespass cattle” from supposed “federal” land, BLM agents even tasered and assaulted some members of the family and its supporters, hundreds of whom came from across America to stand with the beleaguered ranchers whose family has been there since the 1800s. The feds also came under severe criticism for unleashing a dog on a pregnant woman, assaulting a cancer victim, tasering a rancher, and aiming sniper rifles at peaceful protesters. Outrage is still growing.

The supposed reason for the federal intimidation and violence against the family surrounds alleged unpaid grazing “fees” and a desert tortoise that the federal government claims to be trying to protect. However, as The New American and many other publications have documented, there is almost certainly more to the story. Sen. Reid and his family, for example, are being accused of corruption yet again for having multiple financial conflicts of interest, perhaps explaining their fanatical reaction to the standoff. Many lawmakers, though, say it is part of a much deeper problem.

“This is not an isolated incident and is part of a broader war on rural America,” Washington State Rep. Matthew Shea, who is working with other Western officials to evict the feds, told The New American. Another lawmaker seeking to wrest control over the almost 50 percent of land in the West claimed by the U.S. government, Utah House Speaker Becky Lockhart, said: “What’s happened in Nevada is really just a symptom of a much larger problem.”