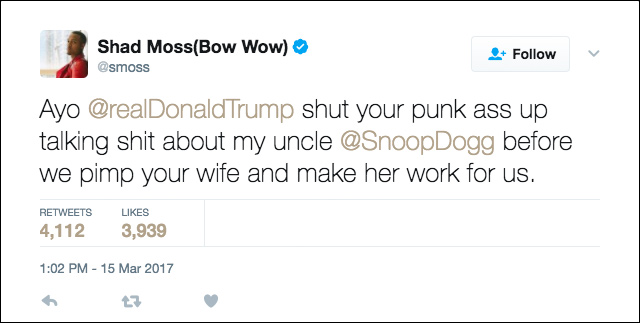 Update: By Thursday, Bow Wow had deleted his tweet following massive backlash from all sides of the political spectrum.

Rap artist Shad Gregory Moss, the nephew of “Snoop Dogg,” stirred outrage after calling for pimping out the First Lady of the United States following a spat between the rapper’s uncle and US President Donald Trump.

Moss, better known as “Bow Wow,” tweeted directly at the president Wednesday saying he and his uncle @SnoopDogg would “pimp your wife and make her work for us.”

The incident began earlier this week when Snoop featured a depiction of the president dressed as a clown in his latest music video, along with a mock execution.

Trump responded via Twitter early Wednesday rhetorically asking what the outcry would be if the same had been done to former President Barack Obama.

Can you imagine what the outcry would be if @SnoopDogg, failing career and all, had aimed and fired the gun at President Obama? Jail time!

“There remains far more brutal and terrifying incarnations of actual gender persecution which we must face together, such as forced enslavement, sexual abuse and absolute repression of far too many women and girls around the globe. We must remember these women in our daily prayers and use our combined resources to help free them from such unthinkable and inhumane circumstances,” the First Lady stated.

Other irrelevant artists, such as rapper T.I., also came out in support of Snoop Dogg Wednesday.