An advertising agency denied business with Infowars due to the “possibility of obscene, abusive, violent, bigoted or hate-oriented content” despite the fact the agency does business with sex shops, “barely legal” magazines and clients accused of selling “hate content.”

California-based CJ Affiliates, a major affiliate marketing firm for web sites, said it consulted its “legal team” about Infowars and decided not to move forward, which suggests the company is picking and choosing clients based on political affiliations through the false veil of “combating obscenity and hate” given its other clients. 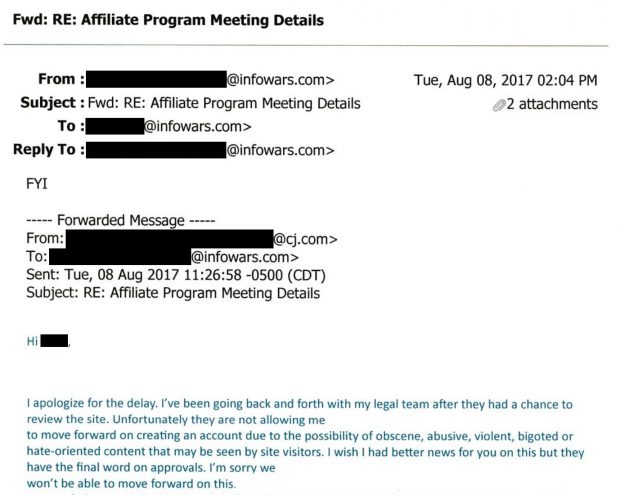 For one thing, CJ Affiliates does business with Discount Magazines, which sells subscriptions to Hustler’s Barely Legal magazine, and Adam & Eve, the self-proclaimed “#1 source for adult toys.” 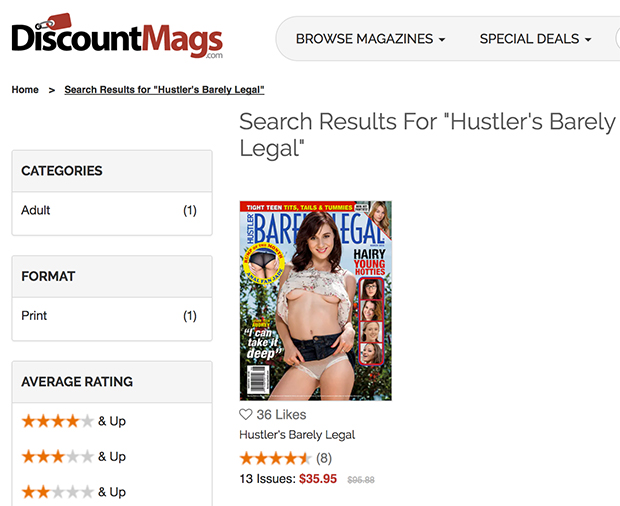 “The vast majority of women have no idea about the kind of pictures and contemptuous woman-hating texts that appear on virtually every page of Hustler,” feminist Diana E. H. Russell once wrote.

Regardless of whether you believe that or not, it definitely contradicts CJ Affiliates’ virtue signaling.

Put it this way: CJ Affiliates, which is based out of heavily-Democratic Santa Barbara, Calif., has no problem dealing with a client selling a smut magazine routinely bashed by feminists, yet it blacklists a libertarian site like Infowars by citing the so-called potential for “obscene, abusive, violent, bigoted or hate-oriented content.”

Additionally, CJ Affiliates does business with CafePress, which was targeted by leftist media for selling “hateful content.”

“CafePress, a virtual marketplace for artists to sell their independently designed clothing and collectibles, has often gotten into trouble in the past for products that depict explicitly racist or prejudiced remarks,” wrote the HuffPost’s Sara Gates. “Though the site has a content usage policy with guidelines for prohibited content, including ‘hate and/or racist terms’ and ‘use of marks that signify hate towards another group of people,’ certain merchandise in violation of these terms is often still posted on the site.”

It seems the CJ Affiliates’ guidelines are selectively enforced to deny business with clients who don’t toe the SJW line, all while giving the agency “plausible deniability” which isn’t that plausible given its client portfolio.

It brings to mind the story about the nine-year-old who wanted a pro-Trump birthday cake, but his mother couldn’t find a bakery willing to fulfill the order.

The authoritarian left wants the government to force bakers to make gay wedding cakes, while simultaneously giving them the freedom to deny orders based on political affiliations.

And that’s the same hypocrisy we see with CJ Affiliates’ selective enforcement of its guidelines.

Another advertising agency, AdRoll, had also blacklisted Infowars earlier this year, basing its decision on false and defamatory “fake news” lists which were debunked.