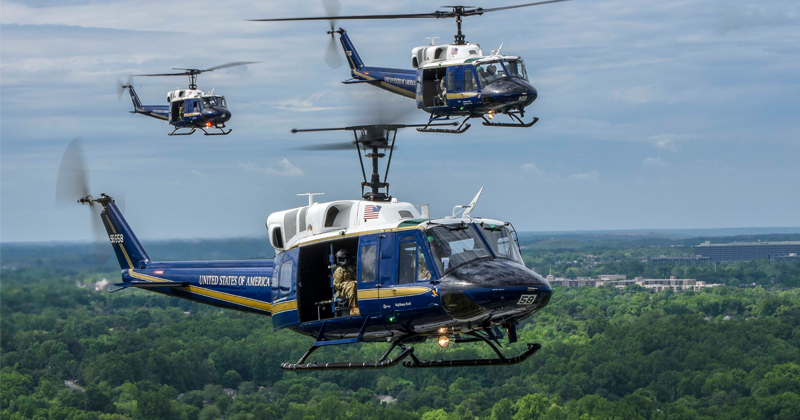 In an almost unheard of and unprecedented scenario, an Air Force helicopter was forced to make an emergency landing in Manassas, Virginia after someone shot at the helicopter from the ground.

The incident happened Monday, and military sources are now revealing the dangerous incident, which actually injured a member of the crew.

McClatchy details that a UH-1N Huey helicopter which flew out of Joint Base Andrews — where Marine helicopters which routinely fly members of Congress as well as the president are based (in the president’s case, Marine One, as well as Air Force One are housed there) — was on a routine training flight after an unknown individual or individuals fired on it from the ground.

McClatchy describes the following based on airport and security statements:

Officials at Manassas Regional Airport said they received a call at about 12:20 p.m. alerting them that “a military helicopter was inbound and that paramedics were on the way,” said airport operations officer Richard Allabaugh.

A second airport official said the injured Air Force crew member was taken to a local facility for treatment. The helicopter remained at the airport as an investigation was launched into the shooting incident.

The FBI immediately dispatched special agents to the area to investigate after the Huey landed at Manassas Regional Airport.

“The FBI Washington Field Office is working jointly with our law enforcement partners, including the Air Force Office of Special Investigations, to determine the circumstances surrounding the incident. One individual in the helicopter sustained a non-threatening injury, for which he was treated and subsequently released from the hospital,” the FBI said in a statement.

Federal agents are also asking for the public’s help in identifying who shot at the helicopter.

The type of ammunition used has not been revealed, nor the extent of the crew member’s injuries, however they were reported as non-life threatening.

Alex Jones exposes the Dems’ open attempts to hijack the office of the president if Biden can’t steal the election.