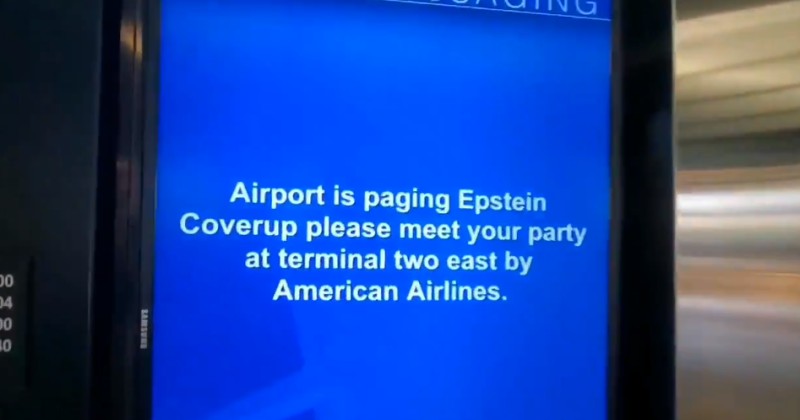 San Diego International Airport paged someone with the name “Epstein Coverup,” as the viral meme relating to the suspicious “suicide” of the billionaire sex trafficker continues to spread.

A video posted to Twitter shows the text, “Airport is paging Epstein Coverup please meet your party at terminal two east by American Airlines” appearing on the airport’s message board.

I have no idea who Epstein Coverup is, but he was just paged at the airport.#EpsteinCoverup pic.twitter.com/l3gdBf80fv

“Needs to happen at every airport,” added another.

Amidst new bombshell revelations by Project Veritas confirming that ABC News sat on the Epstein scandal for 3 years (refusing to report on it during the 2016 election), the meme connected to the controversy appears to be growing in popularity.

As we highlighted yesterday, PewDiePie also featured the ‘Epstein Didn’t Kill Himself’ meme in one of his review videos.

As you can see from some of the images below, the meme is becoming ubiquitous.

Hate it when someone sneaks truth in my candy. #EpsteinSuicideCoverUp pic.twitter.com/idLypFZ1S0

BREAKING: @dennisrodman has a message for you.

DO NOT miss this very IMPORTANT announcement! pic.twitter.com/EZFiUYmhEn