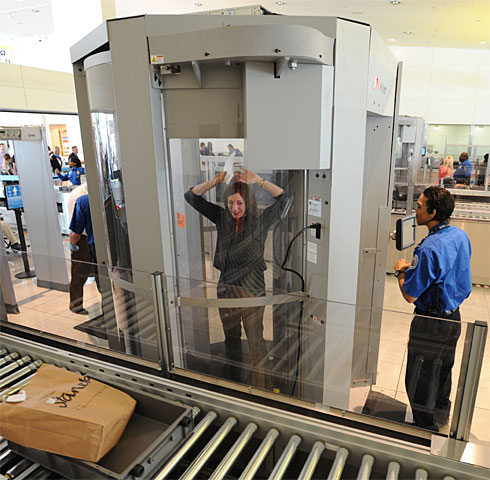 The man is seeing a naked image of the woman similar to the top picture.

The establishment is ensuring that pedophiles and perverts are kept entertained at airport security checkpoints by mandating the mass rollout of naked body scanners that provide detailed images of your child’s genitalia, to be enjoyed by officials sitting alone in back rooms.

Despite official assurances and media talking points that claim the naked body scanners now being implemented in airports worldwide do not show enough detail to be considered a violation of privacy, the true measure of how much of an intrusion they really are is proven by the fact that they break child pornography laws in the UK that bar the production of indecent images of children.

Ministers in the UK will be forced to exempt under-18’s from the virtual strip searches or pass new legislation that protects airport workers from being prosecuted as pedophiles.

“They do not have the legal power to use full body scanners in this way,” said Terri Dowty, of Action for Rights of Children, adding there was an exemption in the 1978 law to cover the “prevention and detection of crime” but the purpose had to be more specific than the “trawling exercise” now being considered.

As the Guardian report highlights, despite the fact that news organizations routinely blur out sensitive areas of the body when showing images produced by the scans, the actual resolution of the images allows airport workers to see “genitalia and breast enlargements”.

Despite the promise that the images would immediately be deleted, Simon Davies of Privacy International warns that scans of celebrities or of people with unusual or freakish body profiles would prove an “irresistible pull” for some employees.

[efoods]Indeed, the fact that your sons and daughters will potentially be subject to a virtual strip search where the shape and detail of their genitalia will be visible to someone sat alone in a back room begs the question of what kind of people would want to apply for such a job. If such technology is rolled out on a widespread basis, working in airport security will undoubtedly become a pull for perverts and pedophiles who will be given free reign to lust over your naked child’s body. How far will Americans acquiesce in the name of safety?

This compilation of articles proves that people in positions of power have routinely and illegally abused surveillance technologies for their own personal titillation, particularly in regard to young women and children.

A school in Overton County, Tennessee was sued to the tune of $4.2 million in damages by parents after school officials allowed surveillance cameras to be installed in locker rooms of children aged 10-14, with the images showing both girls and boys in various stages of undress.

Another case in Sutherland high school New York found that head school custodian Allen Wemes had kept a pornographic stash of footage filmed by a secret surveillance camera placed in a female restroom.

In June 2004, the director of a tutoring center in Chicago was charged with manufacturing and possessing child pornography after he was discovered to be operating a sophisticated video surveillance system in the bathroom of the Beverly Instructional Center.

These are just a few of dozens of cases in the U.S. alone where officials have been caught abusing invasive surveillance technologies for their own perverted pleasure. If similar technology is to be implemented on a mass scale in airports as is being proposed, we are going to see such violations skyrocket to an industrial level.

A familiar tactic employed to convince the public that the scanners are necessary is the repeated use of images that show concealed weapons, creating the perception that everyone is guilty and needs to be scanned. This is reinforced by the public being made to hold their hands up when they enter the scanner in a symbolic act of submission, when holding their arms out horizontally would be no different.

How much humiliation, fealty and degradation are we prepared to accept in the name of being protected from a menace that the government has proven time and again it has no motivation in stopping? The very people promoting the mass implementation of body scanners stand to reap the financial rewards because they are heavily invested in the technology.

Are we going to allow perverts and pedophiles in positions of power enjoy naked images of our children or are we finally going to draw a line in the sand and say enough is enough and start boycotting and filing lawsuits against airports and other institutions that attempt to ram through these revolting and dehumanizing measures?