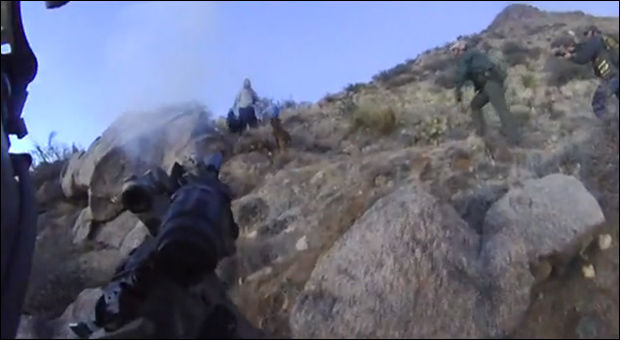 A New Mexico District Attorney’s office has filed murder charges against the Albuquerque police officers who gunned down a non-violent camper last year.

The DA’s office performed a rare but legal move in bypassing a grand jury in order to file the informations, which reportedly mark the first time an Albuquerque police officer is charged after shooting someone in the line of duty.

The two officers will have a chance to contest the charges at a preliminary hearing open to the public prior to a district court judge deciding whether or not to send the case to trial.

Police negotiated with Boyd for longer than three hours after receiving a call from a resident, but soon grew weary of attempting a peaceful resolution, and instead lobbed a flash-bang grenade at the man as he turned to escape. They then fired a cascade of bullets, rendering Boyd incapacitated, and sicced their canine on him before stepping on his hand to make him release two small knives prior to handcuffing him.

It later emerged that Officer Sandy could be heard on police audio talking to a fellow officer about his desire to shoot Boyd “in the penis” prior to actually shooting him.

“For this f***ing lunatic? I’m going to shoot him in the penis with a shotgun here in a second,” Sandy was recorded saying in a conversation to another officer, which he first denied then wrote off as “locker room banter.”

The charges come months after the DOJ concluded an investigation into APD’s alleged use of force tactics, which “determined that there is reasonable cause to believe that the Albuquerque Police Department is engaged in a pattern or practice of use of excessive force, including the use of unreasonable deadly force.”

Boyd’s was the 27th police shooting death since 2010. APD has been criticized for having more officer-involved shootings than cities of comparative size. “The four-year rate of APD’s fatal shootings also is higher than the rate of deadly shootings in police departments in Chicago and New York City,” reported KRQE earlier this year.

Should the case head to trial, a murder conviction could lead to life imprisonment, while a trial jury could also consider lesser charges, such as voluntary manslaughter.

The murder charges mark a turning point in holding the burgeoning police state accountable, an issue brought to the forefront last year by various events peppered across the nation, from the acquittal of two officers over the death of homeless man Kelly Thomas, to the shooting death of Ferguson teen Mike Brown, to the stranglehold death of Staten Island resident Eric Garner, who was choked to death after doing little more than illegally selling cigarettes.