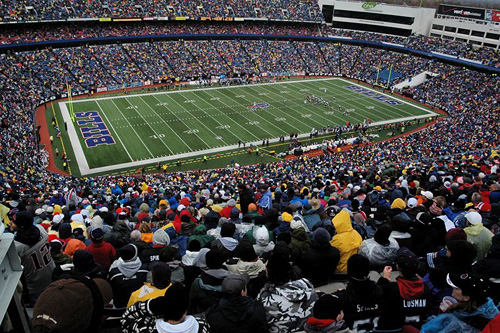 The NFL will roll out its new policy this weekend at the Ralph Wilson Stadium in New York.

Alex Jones has called for a boycott of the NFL following an announcement that the Gestapo zone concept will expand from airports to sports stadiums.

Jones argues the new intrusive pat-down procedure is part of an effort to acclimate the populace to the police state.

USA Today reports that the NFL has announced it will begin intrusive pat-downs of fans this football season. The organization wants all 32 clubs to search 16.6 million fans from the ankles up.

“The enhanced security procedures recommended by our office before the start of the season will further increase the safety of fans but will require some additional time,” NFL spokesman Brian McCarthy told the newspaper.

The new grope-down procedure is part of the NFL’s “Best Practices” policy and will begin this weekend at a Buffalo Bills game at the Ralph Wilson Stadium in New York. The Indianapolis Colts also said they will begin intrusive pat-downs of fans during a game between the Colts and the Browns on Sunday.

In 2007, a federal appeals case gave a green light to pat-down searches of fans after a man brought a lawsuit, claiming the procedure violated his constitutional protection against unreasonable searches. A three-judge panel of the 11th U.S. Circuit Court of Appeals said the man, high school teacher Gordon Johnston, had forfeited his right to challenge the constitutionality of the pat-downs when he consented to them. The court also said Johnston doesn’t have a constitutional right to watch a football game.

At the time, the NFL argued that the searches “provide an essential layer of security in an age of constant terrorism threats,” according to the Associated Press. The NFL did not cite terrorism concerns when it announced the new, more intrusive pat-downs today. USA Today mentioned the arrest of a man for using a stun gun on fans at a New York Jets-Dallas Cowboys game Sunday night.

The Department of Homeland Security partnered with the NFL earlier this year. “Our partnership with the NFL and local law enforcement to bring the ‘If You See Something, Say Something’ campaign to Super Bowl XLV is a critical part of our efforts to ensure the safety of every player, employee and fan in the area for the game,” Napolitano said on January 31, 2011.

In November of 2010, Homeland Security boss Janet Napolitano said body scanners would eventually find their way into U.S. public transportation, trains and boats. “I think the tighter we get on aviation, we have to also be thinking now about going on to mass transit or to trains or maritime. So, what do we need to be doing to strengthen our protections there?” she said.

“We look at so-called soft targets — the hotels, shopping malls, for example — all of which we have reached out to in the past year and have done a fair amount of training for their own employees,” Napolitano said the following month.