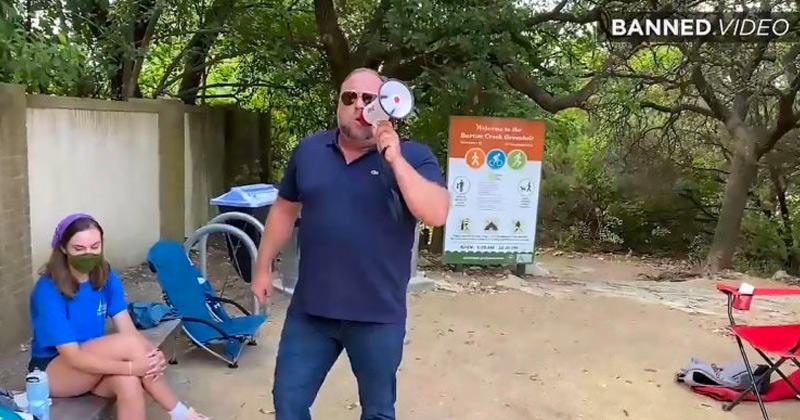 Alex Jones confronted masked contact tracers outside Austin’s public parks, who were preventing residents from entering without reservations and registrations.

With over one hundred thousand acres of parks in Austin, residents are usually free to enjoy themselves in the summer months among the green spaces. However, with the stated goal of fighting the spread of COVID-19 in public parks, Austin Mayor Steve Adler decided to install 10 guarded entrances to the parks, illegally requiring registrations and reservations from citizens, complete with masked guards preventing unwanted entrances.

Adler hired a number of lifeguards who lost their jobs to stand guard at the parks complete with masks. Alex Jones of Infowars went to one Austin park after his wife was refused entry for not having a registration.

Jones approached the masked contact tracers with a megaphone, declaring that their presence and control of the Austin parks was totally “unconstitutional,” noting it’s “not even a city ordinance.” Jones instead described the actions from the mayor as “an illegal power grab of the people’s greenbelt.”

“This is outrageous criminal activity! This is the seizure of the infrastructure of Austin,” Jones continued. “It is all color of law garbage! I call for everybody out there watching. The time for civil disobedience is here! I want this removed tonight.”

A family from San Antonio approached the entrance after driving an hour to the parks to enjoy themselves, but like Jones’s wife, did not have a reservation, and were therefore turned away. However, after speaking to the police at the site, they confirmed that there was no law preventing their entrance, and so they went in.

Jones continued to stand guard at the entrance, high-fiving Austin citizens, and letting them know the actions of the Mayor were not lawful. He encourage people to channel the spirit of Rosa Parks, and not simply “sit at the back of the bus” because they were told to.

“Now lifeguards tell people not to go on a five hundred square mile greenbelt because they might find a virus down here,” Jones added. “The virus isn’t down there – the virus is the control… They can register you in this illegal database right here!”

A park official whose organisation was attempting to enforce the order was spoken to by Jones. “The police even told people that the so-called order you’re using is criminal. It’s colour of law, and it’s like telling black folks they can’t vote. You can’t block people from their parks. This is a fraud!”

The full video, embedded below, is available on Banned.Video.