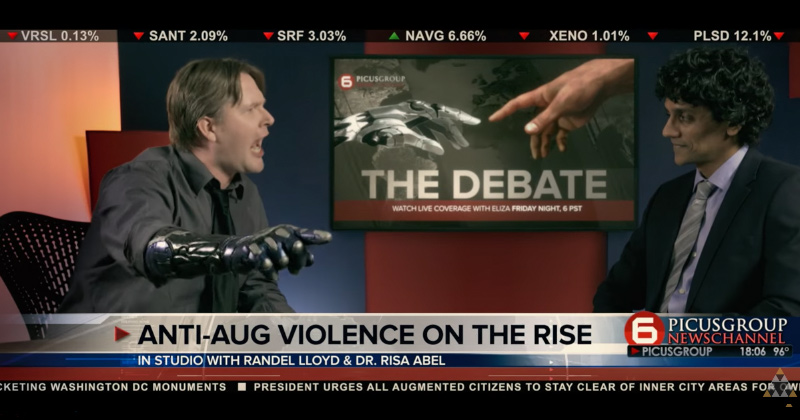 A character resembling radio talk show host Alex Jones is cast as a terrorist leader in an upcoming video game about a war between humans and cyborgs.

The latest installment of the “Deus Ex” video game series, entitled “Mankind Divided,” portrays a future world in which a segment of humanity is “augmented” with mechanical limbs.

After a hacker takes over the population’s limbs, “augmented people across the world were forced to violently attack those around them,” according to a synopsis of the game found at DeusEx.Wikia.com.

“The public is outraged by this event and they therefore aggressively oppose mechanical augmentation. This results in a divided world, where mechanically augmented humans are forcibly separated from non-augmented ones.”

In a cinematic trailer for the game, the character resembling Alex Jones – who seeks equal rights for augmented people – is interviewed on a television program, and recites rhetoric similar to remarks Jones made on CNN in 2013.

“It doesn’t matter how many idiots you get out there on the street,” a voiceover from the Jones-esque character says. “We will not relinquish our limbs. Do you understand?”

“I’m here to tell you, 1776 will commence again if you try to take our firearms! It doesn’t matter how many lemmings you get out there on the street, begging to have their guns taken. We will not relinquish them! Do you understand?” Jones said on Piers Morgan live three years ago.”

Another scene from the trailer shows the Jones-like person asking, “What do they have planned for us? Why are they building concentration camps? What’s going on out there?”

“A lot of people died, now you want to take away our freedom?” the person portraying Jones asks. “You will pay for it in blood,” he says, as the scene cuts to large explosions going off in an urban setting.

“This new video game is both interesting and disturbing and it raises some serious questions about the coming transhumanist technology,” Dice said in a recent analysis. “But it also appears to depict Alex Jones from Infowars.com as a transhumanist terrorist who’s behind a series of truck bombs that are designed to attack humans who are trying to round up the ‘augs’ and put them in concentration camps because their technology is malfunctioning, causing them to become a danger to others.”

“While the concept of the game does raise some serious and realistic concerns about the coming transhumanist technology I do think it’s despicable that they’re depicting Alex Jones as a transhumanist terrorist – at least that’s what it looks like in the trailer.”

Moreover, Dice says, “It also appears to be trying to promote sympathy for the transhumanists in depicting regular humans who don’t want to go along with the agenda as being bigoted and prejudiced afraid of the new technology.”

A previous version of the game, Deus Ex: Human Revolution released in 2011, also featured an radio broadcast from a host named Lazarus who, similar to Jones, speaks out against the Bilderberg group, the “Council of Five” (a take on the Council on Foreign Relations) and the Trilateral Commission.