Infowars emails are being deemed “dangerous” or malicious by Google AI bots evidently auto-flagging our content, Infowars readers are warning.

Contacting us Tuesday, one Infowars listener claimed a recent email sent from Infowars regarding “Alex Jones’ Final Message on the 2018 Midterm Elections,” was deemed not just spam by Gmail, but ominously “dangerous.”

“The left are trying to shut down your emails now,” the alarmed Infowarrior said. “They have a giant red banner on top of all your emails to me that read:

The Infowars reader, who works in the education field, also sent a screenshot of the message they received:

Here’s the video we sent out, which was flagged as “dangerous” by Gmail: 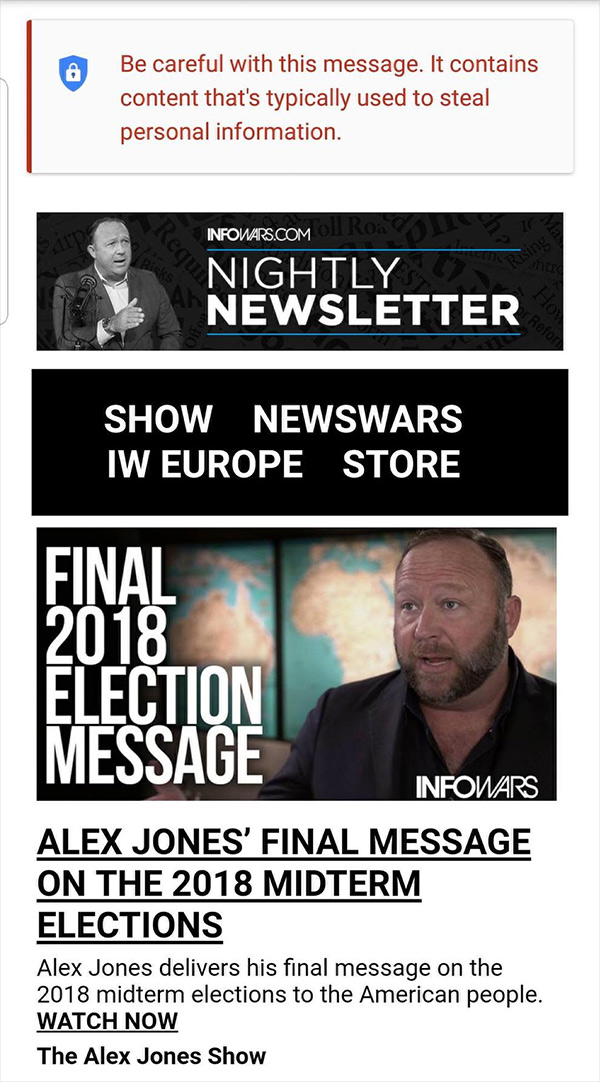 This is one of big tech’s latest dirty tricks designed to suppress Infowars. Google has already shut down our Youtube, and now they’re moving against our emails – a sure sign they’re about to make similar moves against other prominent conservatives.

Which brings us to an important point: Please adjust your email settings to allow emails from Alex Jones, Infowars and the Infowars Store.

As the liberal establishment continues suffocating free speech, it’s critical you sign up to our email newsletter, our mobile text alerts and spread our links on social media to bypass the electronic Berlin Wall.

Sign up for our newsletter below, or go to https://www.infowars.com/newsletter-sign-up/.