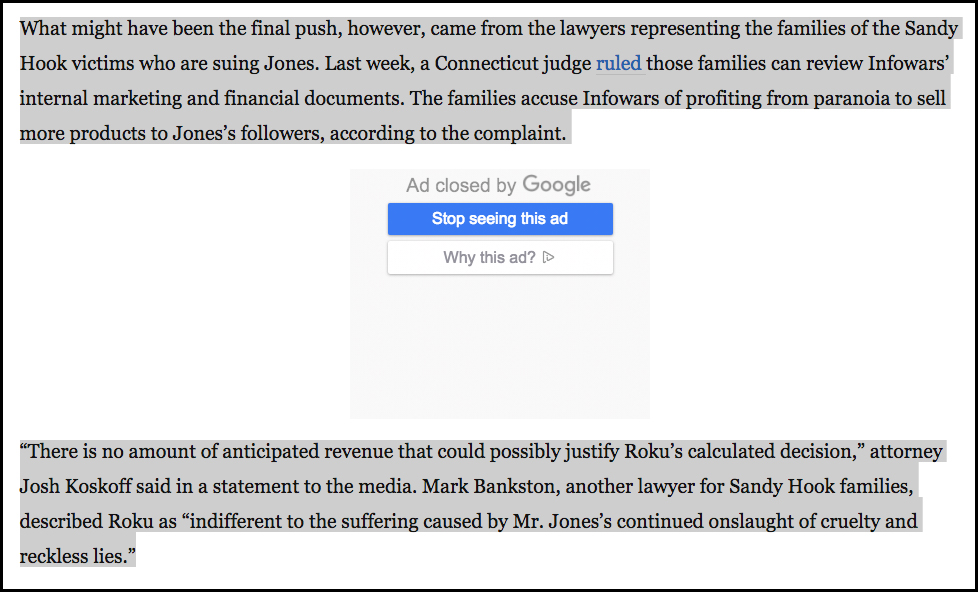 Alex Jones issues an official statement on his recent Roku banning and explains how the media is attempting to tie Sandy Hook to this latest ban.

It is important to emphasize that PR firms and lawyers representing Sandy Hook parents must cease with their false allegations that Jones represents a present danger to Sandy Hook families.

At no point in the past or presently has Jones encouraged anyone to visit the homes of Sandy Hook families. No evidence has ever been presented to prove this in public or in court. These false allegations must stop or Alex Jones will be forced to take legal action.

Jones clears the record after hundreds of media outlets simultaneously released articles about the removal, but most of them got the story completely wrong.

In a Washington Post article about the ban they claim, “Roku even heard from lawyers representing the families of Sandy Hook victims, who say they continue to be threatened and harassed thanks to the Infowars-spread conspiracy theory that the 2012 massacre that killed 27 people, including 20 children, didn’t happen.”

WAPO continued, saying, “What might have been the final push, however, came from the lawyers representing the families of the Sandy Hook victims who are suing Jones. Last week, a Connecticut judge ruled those families can review Infowars’ internal marketing and financial documents. The families accuse Infowars of profiting from paranoia to sell more products to Jones’s followers, according to the complaint.”

“There is no amount of anticipated revenue that could possibly justify Roku’s calculated decision,” attorney Josh Koskoff said in a statement to the media. Mark Bankston, another lawyer for Sandy Hook families, described Roku as “indifferent to the suffering caused by Mr. Jones’s continued onslaught of cruelty and reckless lies,” they continued.

The move by Roku is only the latest in attacks against pro-Trump outlets, specifically Infowars who leads the charge in the information war against the global elite.