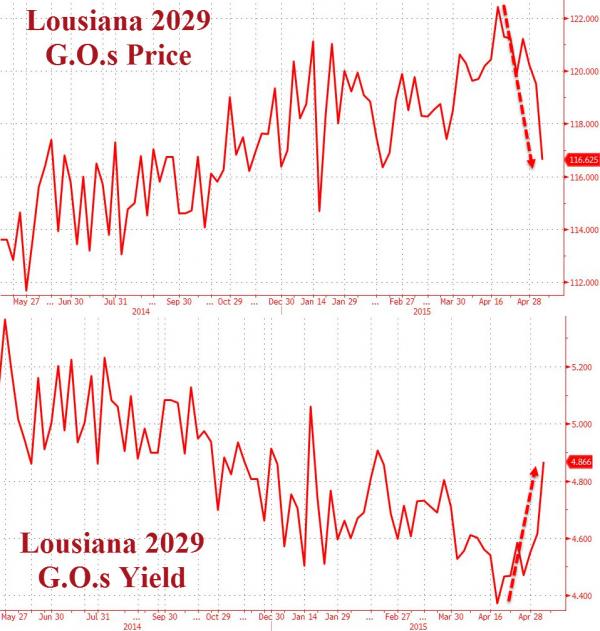 Last month, we documented the case of Louisiana State University, the large, well-known public institution whose 2014 enrollment totaled nearly 31,000 students. LSU, it turns out, is facing funding cuts of as much as 82% which, if realized, would likely force the school into financial exigency, the college equivalent of bankruptcy. The reason for the cuts: the sharp decline in oil prices and fiscal mismanagement have conspired to blow a $1.6 billion hole in the state’s budget.

With tax revenue from the oil industry falling short of projections, the deficit has swelled to $1.6 billion for the fiscal year that starts July 1. Moody’s Investors Service and Standard & Poor’s say they may lower Louisiana’s credit rating if officials don’t come up with sustainable budget solutions.

Louisiana paid the price when it sold $335 million of general obligations Wednesday, its first deal this year. Borrowing costs jumped compared with an issue in November, with the yield spread more than doubling on some maturities.

“They have to make significant cuts across the board — it’s almost a foregone conclusion they’ll be downgraded,” said Tom Metzold, co-director of municipal investments in Boston at Eaton Vance Management, which oversees $25 billion in local debt.

Lawmakers are grappling with the state’s finances in part as the price of crude oil, which along with natural gas generates 13 percent of its revenue, is down about 40 percent from mid-2014. The mounting fiscal strains threaten to pinch funding for programs such as higher education, contributing to a buyers’ revolt last month against a bond sale from the state’s flagship university…

Steve Hlavin, who runs a Louisiana fund for Nuveen Asset Management in Chicago, said he hasn’t bought state general obligations since 2010 and probably won’t dive back in Wednesday.

“For a state that’s exhibited chronic structural budget imbalance, you aren’t being compensated with a lot of credit spread,” Hlavin said. “They’re being forced to come to terms with the fact that one-shot solutions are no longer available.”

The real problem however is that large budget shortfalls aren’t confined to Louisiana. In fact, a new study from AP shows that big gaps are becoming more the rule than the exception across the US.

An Associated Press analysis of statehouse finances around the country shows that at least 22 states project shortfalls for the coming fiscal year. The deficits recall recession-era anxiety about plunging tax revenue and deep cuts to education, social services and other government-funded programs.

“After all, if a state is grappling with a budget deficit now, with the economic expansion approaching its sixth anniversary, what will be its condition when the next slowdown strikes?” credit analyst Gabriel Petek wrote in a recent report.

The forces at work today are somewhat different than when the recession took hold in 2008. In some states, revenue growth has been stagnant, missing projections and making it difficult to keep pace with expanding populations and rising costs for health care and education. Other states have been hurt by a steep decline in oil prices or seen their efforts to promote growth through tax cuts fail to work as anticipated…

A majority of states have failed to climb back to their pre-recession status, in terms of tax revenue, financial reserves and employment rates, said Barb Rosewicz, who tracks the fiscal health of states for The Pew Charitable Trusts.

Alabama, for example, faces a $290 million shortfall after a voter-approved bailout expires at the end of the current fiscal year. If nothing is done, the courts will not have the staff to send jury notices, monitor juvenile delinquents, process protection orders and collect and distribute child support payments, he said.

“This is an insane proposition,” Hobson said. “The public would suffer.”

Nationally, total tax revenue coming to the states has been rising, but the pace has been slow as employment continues to lag pre-recession levels in more than half the states, according to the Pew Charitable Trusts. Pew also found that 30 states are collecting less revenue than at their peak.

The Census Bureau recently reported that total state government tax collections in fiscal year 2014, which in most states ended last June, increased 2.2 percent over the previous fiscal year. That represented the fourth consecutive overall increase, but 17 states reported declines in tax revenue from the previous fiscal year, according to the report. Alaska saw the biggest drop, of $1.7 billion.

In Illinois, lawmakers are trying to figure out how to close a $6 billion projected shortfall for the next fiscal year, due largely to the expiration of a temporary tax increase [and] in Kansas, the Republican governor and GOP-dominated Legislature now confront budget deficits after aggressive tax cutting that prompted them to reduce school funding this spring.

Kansas’ troubles emanate from a income tax cuts implemented at the behest of Gov. Sam Brownback and have created what one public school superintendent calls the worst situation he’s ever seen in terms of the degree to which the education system is being squeezed. More color, from Bloomberg:

As lawmakers work to erase a projected $800 million budget gap for the fiscal year starting July 1, at least eight school districts that saw their funding cut this year because of a greater-than-projected slide in state tax collections will begin shutting down before the scheduled end of classes. Dozens of others have eliminated or cut programs.

Early school closings and program reductions are signs of a budget sinkhole in Kansas, where Brownback and the Republican-controlled legislature approved large income tax reductions in 2012 and 2013. They said reduced levies would spur economic activity that would compensate for lost state revenue. The governor called his move to gradually end the income tax “an experiment.”

It hasn’t delivered the promised benefits, producing instead bigger revenue losses and, at least in the short-term, a cautionary tale of the effectiveness of using large tax cuts to spark economic growth…

“There have been times when things were tight, but this is the absolute worst I’ve ever seen it,” said Mike Sanders, superintendent of Skyline Public Schools, which will end the school year two days early on May 12.

Skyline, about 75 miles west of Wichita, has petitioned the state for emergency cash so it can meet its June payroll.

“It’s crazy times,” Sanders said. “The ideology in this tax experiment has gone too far. It’s almost as if they’re hell-bent on proving their point, no matter the damage it causes.”

Meanwhile, Brownback recently got a rather amusing wake up call at dinner when his waitress, one Chloe Hough, advised the Governor to take the tip he presumably would have left and give it “to the schools.” 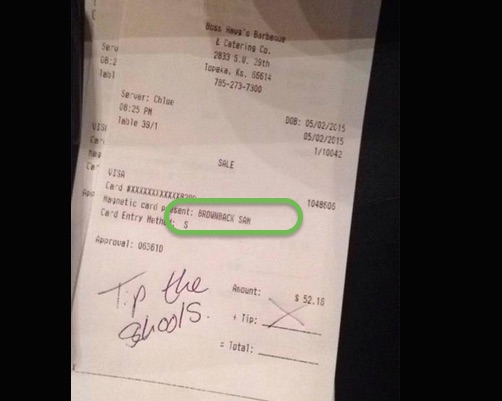 All of the above will of course be exacerbated in an environment where the macroeconomy takes a sudden dive (as it did in Q1) and any sustained economic slowdown could serve to inflict further pain on the public sector, which leads us to wonder if the anti-austerity movement is about to take to take root in America just as it has in the euro periphery. We’ll close with the following from Morgan Stanley’s bear case scenario:

Bonus chart: tax revenue growth, while still positive, has slowed markedly over the past three years 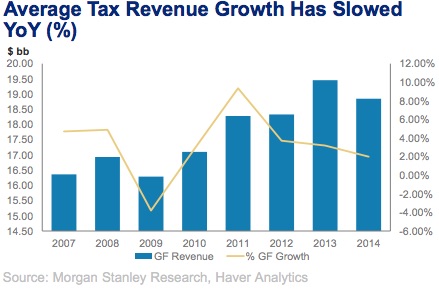